THE BEST DAY OF MY LIFE-- by Guest Author Yvonne Anderson

So said my granddaughter, seven years old, when I picked her up from school one afternoon in October, 2012. Her two younger brothers were excited as well, and so was I. It may not have been the best day of my life, but it was one that would change all our lives forever.

That was the day our daughter and son-in-law brought home the two newest members of the family: a boy of about four, and a 10-month-old baby girl. They were coming from their birthplace, the Democratic Republic of the Congo.

Before our daughter and son-in-law married, they agreed on a plan: they would have three children, then adopt two, and then become foster parents. And they began implementing the plan right on schedule.

My husband and I welcomed our first three grandchildren into the world, doting
on them like typical grandparents. But when we learned the family was starting the process of international adoption, it caught us off guard. You have three children of your own; why would you want to adopt? There are plenty of children in the US who need homes; why go overseas? Can you afford it? Are you sure this is wise? What about your other kids? Have you prayed about this?

Our daughter assured us that they had, and it was clear to them both this was the right course of action.

It was a long process. Unbelievably expensive. But the Lord provided
abundantly and held them up through the whole thing, until finally the day came that their newest children would be united with the family—the day their firstborn declared was the best of her life. That was four years ago, and I don’t think she’d take her words back.
Now we have answers to all the questions my husband and I first asked:

Why adopt? Because there are an estimated 147 million orphaned children in the world; if we are in a position to bring a couple of them into our home, how can we say no?

Why go overseas? Because the need is more desperate. As hard as it is to be an
orphan anywhere, here in the US, social services are in place to help. But in many other countries, a child that is not adopted and outgrows the orphanage is often put out on the streets with no way to make a living. Young boys are conscripted into the military; girls are forced into prostitution; destitution and violence are all they can expect for the rest of their short lives. We can’t save them all, but that shouldn’t prevent us from saving one or two.
Can you afford it? Though my daughter and son-in-law have a good income, the cost still seemed prohibitive. But with careful budgeting, numerous fund-raising efforts, and especially by the grace of God, they were able to meet all the necessary expenses. As in every endeavor God lays before us, if this is what he wants you to do, he’ll provide everything you need to accomplish it.

How about the other kids? My daughter and son-in-law prepared their three other children wisely, letting them know step by step what was going on. The children were encouraged to pray for their as-yet-unknown siblings and to consider them part of the family from the beginning. When they drew family portraits, they included “my brother and sister who live in Congo.” When the new arrivals finally came, the children were eager to welcome them. Their parents took care at first with their early interactions, but the rough spots weren’t much more difficult to deal with than the transitions required when a newborn baby comes into a family.

My husband and I had no trouble accepting the adopted ones as our own true grandkids. We are more grateful than we can express that our daughter and son-in-law have been able to offer hope to these two young lives. The experience has broadened our perspectives of the world.

More than that, though, it provides a breathtaking illustration of a greater truth: that of the believer’s adoption into the family of God.
These children did not come to us by accident: God chose them for our family, and enabled our family to receive them. As exciting and satisfying as it’s been so far, I look forward to seeing what he’s planning to do in the coming years with these precious lives he’s allowed us to touch.

Oh, by the way: the family is also following through on the plan to foster children, to the enrichment of all of our lives. 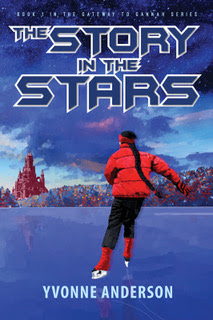 Yvonne Anderson writes fiction that takes you out of this world. The Story in the Stars, first in the four-book Gateway to Gannah series, was an ACFW Carol Award Finalist in 2012. Watch for her contemporary fiction story in a novella collection to be published in the spring of 2017.


PURCHASE YVONNE ANDERSON'S BOOKS  (Links Below)
The Story in the Stars

Words in the Wind

Ransom in the Rock

The Last Toqeph
Posted by Christine Lindsay at 12:30 AM