TWO WORDS I DESPERATELY NEEDED TO HEAR, "ME TOO?" by Becky Lapointe

Today my guest is Becky Lapoint, writer, speaker, and owner of her own music studio. Beckie lives with her new husband and five kids in Abbotsford BC. 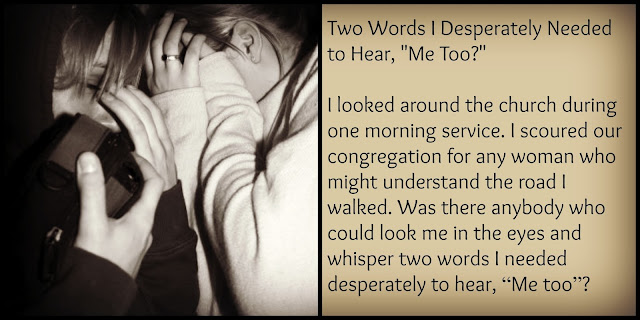 I carried a secret. I was married to a gay man. I knew he wanted to leave and that terrified me. We had four kids and a mortgage. We built a life together. I wanted it to be a real life. I feared all I had was a charade.

I prayed and I prayed. I memorized Stormie Omartian’s book The Power of a Praying Wife. I walked through healing ministry. I got a job in the church. I claimed every possible promise of God that pertained to my marriage. I insisted we name our youngest daughter Faith because I wanted Jesus to know I had faith our marriage would “make it”. I had hope that my valiant attempt at influence counted for something.

Intimacy was a thing of the past and I told myself it was okay if I was never touched, or hugged, or had sex again. Providing a stable home for my kids was all that mattered. I begged. I manipulated. I cried an ocean of tears.

And still he left.

People often say the worst rarely happens, but in many ways, “the worst” did happen to me. My kid’s dad and I had the most awful of awful conversations with our wee ones to tell them Dad was leaving. He eventually told the kids he was gay when I was in Mexico on a Missions trip. His doing so meant I wasn’t there to help them process (talk about feeling out of control!) Professionally, I lived out my divorce while I was a Women’s Pastor. All the church members watched. Thankfully, for the most part, they were caring and compassionate.

There was further insult to injury. I lost the majority of my inheritance we used as our house’s down payment. Although I didn’t go bankrupt, I almost did.

I wish I could tell you Jesus magically swooped down and took the hard away, but that would be a lie. I can tell you in the middle of those agonizing times, I learned some wonderful things, some “treasures of darkness*”:

The affect on my kids was my biggest fear. But God shows up in their lives and ministers to them like he ministers to me. Jesus loves my kids more than I ever could, and he cares for them better than I can. My oldest daughter was baptized in June and during her testimony she told the church although her family looks different “it doesn’t mean it can’t be good.”

I’ve learned that God still delights in surprising me with good things. There are lots of stories there for another day. And although I’m through this hard experience, I’m not done with difficulties. God doesn’t promise me smooth sailing: he promises to be with me in the storm.


Beckie Evans is an aspiring writer, speaker, and owner of her own music studio. Her undergraduate degree is in music and presently she is working on her Masters of Divinity with a Gender Studies focus at ACTS Seminary in Langley. She and her dear friend Rebecca Schroeder RCC are writing ReVision: When Gender Issues change Partner Relationshipsand hope to have it completed by Fall 2016.

Beckie lives with her new husband and five kids in Abbotsford, BC.

For more about Author and Speaker Becky Lapoint check out her blog site. www.ididlearnsomething.blogspot.ca