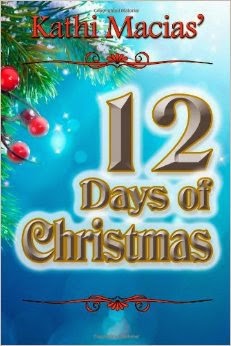 Yes, it's May, summer is here, but we can still celebrate Christmas.
The values should be kept all year long.

The paperback version of Twelve Days of Christmas compiled by Kathi Macias, and including Kathi Macias and eleven other authors has just been released.

Or take a look at the Blog Tour sites below and leave comments for a chance to win a free paperback copy.

I began thinking of my own contribution to this series of Christmas stories in July.  My husband and I were traveling through the Rockies on our holidays. At the summit of Roger's Pass, we passed a military artillery rifle. My husband explained that the rifle was used to shoot into the snow fields and create an intentional avalanche.

The characters came soon after. I thought of my own life, and my desire to spend more time with my husband doing fun things, instead of always working.

That's where the characters of Heavenly Haven came from. A young couple who've been married for ten years and unexpectedly heartache arrives...suddenly like an avalanche.

I wrote Heavenly Haven Day for the ninth day of Christmas to show that romance can still happen---even if you've been married for a while, and have little ones.

Married for ten years, avalanche control expert Jack, and ski pro Avery, only wanted to celebrate their December anniversary in a romantic way, until the shifting snows on the mountain bring havoc tumbling down upon them. Can they find renewed love in a heavenly haven of snow?

May 19 - Ruth L. Snyder at http://ruthlsnyder.com/
May 20 - Anne Baxter Campbell at http://pewperspective.blogspot.ca/
May 21 - Marcia Lee Laycock at http://marcialeelaycock.com/
May 22 - Mishael Witty at http://bluebrownbooks.com/
May 23 - Christine Lindsay at www.christinelindsay.com/
May 24 - Sheila Lagrand at http://sheilalagrand.com/
May 26 - Jessica Ferguson at http://jessyferguson.blogspot.com
May 27 - Kathy Bruins at  http://www.kathybruins.com/writing-speaking-and-other-interests/
May 28 - Peg Phifer at http://www.whispersinpurple.com
May 29 - Jeanette Hanscome at http://jeanettehanscome.com/

And on this blog tour for Twelve Days of Christmas, I am giving away on free paper-back copy of this book to those who comment below and leave their email address spelled out.

Twelve Days of Christmas is a series of individual Christmas stories that cover a 12-day period—to be celebrated all year long! That’s the heart of this unique Christmas collection, compiled by best-selling author Kathi Macias and including historical, contemporary, romantic, mysterious, and even Amish tales that will warm your heart, whether sipping hot cocoa while sitting in front of the fireplace in winter or under a shade tree in the summer, nursing a frosty glass of iced tea or lemonade.

Beginning with a scene set 12 days before Christmas, these stories move readers, one day at a time, toward that spiritual hush of Christmas Eve, where anything is possible.

Authors from various geographical locations and walks of life have spun tales that will enchant readers, even as they are drawn closer to the greatest Gift ever given. And each story, though vastly different from the others, makes the same offer: Will you make room in your heart for the Christ-child as He shows up in your life and beckons you to join Him?


Posted by Christine Lindsay at 8:50 PM

Email ThisBlogThis!Share to TwitterShare to FacebookShare to Pinterest
Labels: Twelve Days of Christmas by Kathi Macias