Christine here: My guest today, Miralee Ferrell is doing a book drawing/give away. The winner can take their choice of book one, Blowing on Dandelions, or Book two, Wishing on Buttercups, or the novella when it releases in March, Forget Me Not. Leave your comments with your email address spelled out, and I will draw your name from a hat. And now...to my guest...

My husband Allen and I have hit a lot of financial hurdles over the years, but this particular one brought a truck load of stress, and we felt like it was about to bury us. We didn’t know what else to do but try to sell our home to get out from under the load, but we’d put our house on the market three different times over a three year period with no success. This time nothing appeared to have changed.

I was nearing desperation and made the commitment to pray until I sensed break-through. Allen and I also decided to give a “break-through” offering that we couldn’t afford, following the scriptural principal of giving over and above our tithes, and asking that the windows of heaven be opened and a blessing poured out.

Two weeks passed, then three, and we continued to press into the Lord, asking Him to provide a buyer. One evening I hit a low, something very unusual for my upbeat personality, and I began to cry out to Him, pleading for mercy and that He’d give us hope.

Not long after, I began to praise Him and then settled into a time of listening with my spirit. I heard, very softly the following words… “One week.”  One week—what? We didn’t even have anyone looking. Maybe He meant that within a week, someone would view it, and we’d start the process…Maybe…a ton of scenarios flooded my mind but that voice persisted. One week.

Two days later a friend called. Their relatives were flying in and looking for a house—this friend believed our place in the country was just what they wanted. Could they come in two days? Husband and wife spent several hours walking the property and talking, and then they returned for another visit the following day. That evening, they called with an offer, and the next day we signed earnest money papers. A total of six days had passed from the time the Lord told me one week! Our faith was increased ten-fold, and our needs were met. God is faithful, even when things appear at their most desperate.

Can Love Survive When Secrets Collide?

She’d kept her secrets safely hidden—those from her past, and those in the present. Some things, Beth Roberts knows, a lady simply doesn’t share, even in the 1880’s West. The townspeople would never understand. No one ever has.

Jeffery Tucker, a handsome young writer, has kept his own secrets. He doesn’t have a right to pry into Beth’s affairs but finds himself strangely drawn to her and intrigued by the whiff of mystery surrounding her.

Beth knows that one day someone will unravel the threads of her past. And when two men from her past arrive, the truth might just hurt . . . Beth’s future and her heart.

As shadowy memories surface, Beth sketches the scenes she sees and is shocked by what—and who—her illustrations reveal. Dare she risk her heart again? 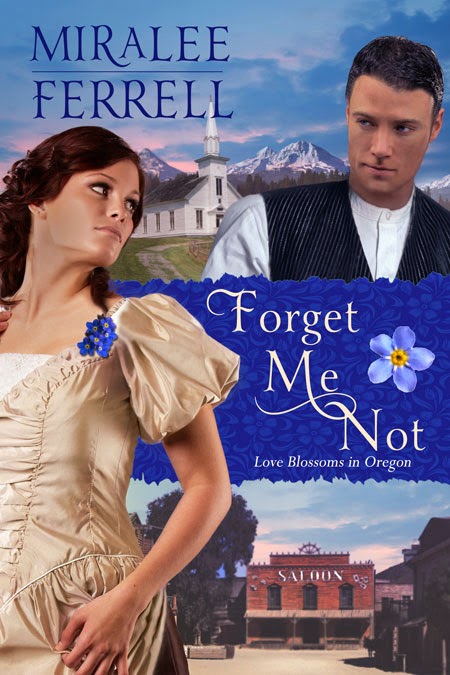 FORGET ME NOT by Miralee Ferrell

Pastor Seth Roberts had worked for years to convince himself that the girl he’d loved and lost didn’t matter, and he’d almost succeeded—until she turned up in Baker City, hundreds of miles from where they’d courted.

Six years ago, Julia McKenzie ran away from the man she’d thought she might marry, wanting to experience more of life. Now, at age twenty-three, she’s experienced more than she’d ever expected, only to wish she’d made different choices. Was it too late to go back, and would the man she cared for understand the direction her life has taken and love her in spite of her choices?
ABOUT MIRALEE FERRELL

Miralee and her husband, Allen, live on eleven acres in the beautiful Columbia River Gorge in southern Washington State, where they love to garden, play with their dogs, take walks, and go sailing. She also combines two other passions—horseback riding and spending time with her grown children—since her married daughter lives nearby, and they often ride together on the wooded trails near their homes.

Her novel Love Finds You in Sundance, WY, won the Will Rogers Medallion Award for Western Fiction, and Universal Studios requested a copy of her contemporary debut novel, The Other Daughter, for a potential family movie.

After serving five years as the president of the Portland/Vancouver chapter of ACFW (American Christian Fiction Writers), Miralee now volunteers as a board member and belongs to a number of writers’ groups. She also speaks at women’s groups, libraries, historical societies, and churches about her writing journey.

Wishing on Buttercups is available at most major stores including Sam’s Club, Barnes & Noble, Christian bookstores, and all online book sellers for both paperback and eBook.