HOW LONG CAN YOU WAIT ON GOD? -- By Guest, Dave Fessenden

What is the longest time you have waited for God to fulfill a promise?
The other day, I was telling a friend how my first novel, The Case of the Exploding Speakeasy, came about. While at my in-laws’ home, I happened upon a book of Sherlock Holmes stories by Arthur Conan-Doyle. This started a life-long love of the great detective, and I read every one of the Sherlock stories many times over.
I was especially fascinated with one character in the stories: Mycroft Holmes, Sherlock’s older brother, who had the same powers of observation and deduction, but to an even greater degree. I thought, perhaps I could write a story featuring Mycroft. And so began my first major foray into fiction. I tinkered at it for a long time, and was often discouraged, but I sensed that God wanted me to continue on and to trust Him with the results. Over the next few decades, various experiences of mine found their way into the story.
When I concluded by saying that my novel was 30 years in the making, my friend said, “That’s just like Abraham waiting for Isaac.” Or, like Moses spending 40 years tending sheep as he waited to take on the leadership of the people of Israel. Or like Joshua and Caleb—despite the fact that they were faithful and believed the Lord, they had to wait 40 years to finally enter the Promised Land.
It seems that waiting is a recurring theme in Scripture, and in the Christian life. Andrew Murray even wrote a whole book on it. He implies that waiting is absolutely necessary for human beings, because if God’s answers were instantaneous, we would tend to think we were in control. Waiting is one of the few concrete ways we can express and exercise our dependence on God.
So, how long have you waited on God? Are you still waiting? What you are waiting for may seem far more urgent and  desperate that the completion of a novel,  but keep it up—it’s a form of worship. And don’t forget what God promises: “And will not God bring about justice for His elect who cry to Him day and night, and will He delay long over them? I tell you that He will bring about justice for them quickly. However, when the Son of Man comes, will He find faith on the earth?” (Luke 18:7–8).
About David Fessenden:
David E. Fessenden is a literary agent with WordWise Media Services and an independent publishing consultant with degrees in journalism and theology, and over 30 years of experience in writing and editing. He has served in editorial management positions for Christian book publishers and was regional editor for the largest Protestant weekly newspaper in the country.
Dave has published six books, written hundreds of newspaper and magazine articles, and edited numerous books. He is a frequent speaker at writers’ conferences. In 2011 he pooled his experience in Christian publishing to produce Writing the Christian Nonfiction Book: Concept to Contract, published by SonFire Media. The Case of the Exploding Speakeasy, Dave’s first novel, reflects his love for history and for the Sherlock Holmes stories of Arthur Conan-Doyle.
Dave and his wife, Jacque live in south-central Pennsylvania and have two adult sons. 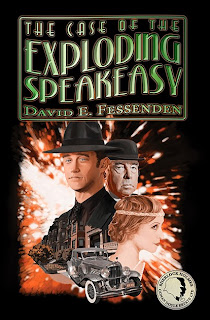 The Case of the Exploding Speakeasy:
A Holmes-Watson Detective Team—in Jazz-Age Philly!
Thomas Watson leaves London to become a newspaper reporter in 1920s Philadelphia, in an attempt to get out from under the twin shadows of his famous father, Dr. John Watson, and his father’s even more famous friend, the late Sherlock Holmes.
After two short years, with little success in journalism, and mourning the recent death of his father, Thomas suddenly finds himself caught up in the biggest story of his career: a suspicious explosion at a speakeasy, which kills the owner and his card-playing buddies.
Convinced it is not a mob hit, as the police and his editor think, Thomas is helped by Sherlock’s brother, Mycroft, recently arrived from England. Mycroft quickly solves the mystery but refuses to tell Thomas the solution, saying he should figure it out himself. With the scanty clues he has, can Thomas track down the murderer—before becoming his next victim?

Email ThisBlogThis!Share to TwitterShare to FacebookShare to Pinterest
Labels: Faith, Waiting on God