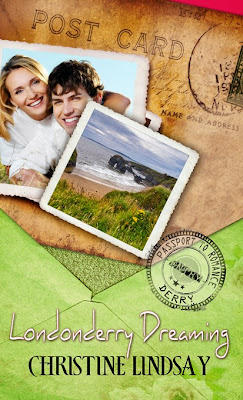 To give you a taste, here's an excerpt from Londonderry Dreaming to be released February 2014. Londonderry Dreaming is my first romance novella with WhiteRose Publishing in their Passport to Romance line. I'm excited about this book because it's contemporary, and I was able to take some of my own memories of N. Ireland and put into the story. I also dedicated it to my Aunt Maggie.

“I have some truths about your grandfather that I think you should know. Not bad things, so don’t let that worry you. Brennan was always a good man, holding honor highly, perhaps too highly at times. But there are things I think you should know that will help you understand why he never returned to Ireland, why he never wanted you to remain here for any length of time. Come and stay with me a while, Naomi. In my heart, you’ve always been like a granddaughter to me, and before I go home to Glory, there is something  of mine  that I want you to have..”

Posted by Christine Lindsay at 11:52 AM