STORY BEHIND THE COVERS—By Christine Lindsay

Some readers may already know that the model on the front cover of Shadowed in Silk is Sarah, the daughter I relinquished to adoption in 1979, and was reunited with when she was twenty in 1999. Relinquishing Sarah was the hardest thing I’ve ever done, but it was the only way at the time I could give her the life she deserved.

God was so good to me in the years following my loss of Sarah. A year after giving up Sarah, the Lord sent me my sweet husband David and gave us our three children.

Skip ahead . . . twenty years later when Sarah, and I were reunited—wonderful and terrifying at the same time. One of my deepest heart desires was that my two daughters, Sarah and Lana, become close. I used to pray they’d become like the bookends they were in my heart.

Adoption reunions are not easy for anyone. To my heartbreak, it didn't appear that the long desired special relationship would develop. A few months after meeting Sarah, my husband caught me crying and placed a brand new pen and journal into my hands. “Here honey, write it.”

One day as I was journaling, a Bible verse jumped out at me and for the first time I understand the love of the Heavenly Father. Isaiah 49:15, 16.

“Can a woman forget the baby at her breast, and have no compassion on the child she has borne. Though she may forget, I will not forget you. See…I have engraved you on the palms of my hands.”

A few years later I felt the Lord encourage me to put the emotional and spiritual healing that He had given me into fictional stories to help others. In 2011 my debut novel was about to be released, and in a serendipitous way God arranged for Sarah to be the model on the cover of Shadowed in Silk. 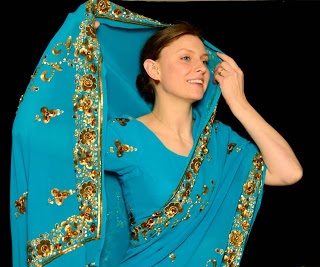 Sarah in the sari material I bought in India.

A few months after Shadowed in Silk was released, my birthdaughter Sarah and her husband Mark announced they were joining Global Aid Network to work with organizations that help widows and orphans.

One of those missions was the Ramabai Mukti Mission in India. When I heard this I nearly fell off my chair. I had never told Sarah that the true-life Ramabai who started the Mukti mission in India was the inspiration behind Shadowed in Silk and Captured by Moonlight.
Many years ago, I had prayed for the Lord to give Sarah, Lana, and me, a special relationship. It took a while, but He knit our hearts together in the respective work He gave each of us to do.

When it came time to release Captured by Moonlight I asked for my daughter Lana—the daughter God gave me to keep—to be the model on the front cover.

A long time ago, I had prayed that one day I’d see my two daughters together like bookends. Thanks to our Awesome, tender-hearted Heavenly Father, He gave me just that. 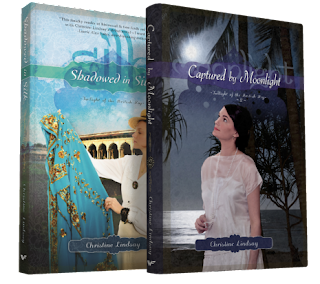 Both my beautiful daughters on the books God inspired.

Author Bio: Irish-born Christine Lindsay writes award-winning historical novels. In Shadowed in Silk and Captured by Moonlight, Christine delights in weaving the theme of the Heavenly Father’s redemptive love throughout stories of danger, suspense, adventure, and romance. Christine is currently writing Book 3 of that series to be released August 2014, Veiled at Midnight. The Pacific coast of Canada, about 200 miles north of Seattle, is Christine’s home.
Book Blurb: Captured by Moonlight

After a daring rescue goes awry, the parched north of India grows too hot for nurse Laine Harkness and her friend Eshana. The women flee to the tropical south…and run headlong into their respective pasts.

Laine takes a new nursing position at a plantation in the jungle, only to discover that her former fiancé is the owner…and that Adam has no more to say to her now than he did when he crushed her years ago. Why, then, is she still drawn to him and to the tiger cub he is raising?

Eshana, captured by her traditional uncle and forced once more into the harsh Hindu customs of mourning, doubts whether freedom will ever again be in her future, much less the forbidden love that had begun to whisper to her. Is faith enough to live on? Or is her Savior calling her home?

Amid cyclones and epidemics, clashing faiths and consequences of the war, will the love of the True Master give hope to these searching hearts?

Posted by Christine Lindsay at 5:45 PM