Dinner was ready. My husband Bill should have been home an hour earlier.


The brightness of a day-time snowstorm had turned to early dark. I’d fed the baby through his colicky fussiness.


I started to fret and stew. It was the day before Thanksgiving and I knew Bill had made no insurance appointments for that evening.


After I finished cleaning up the kitchen, I went from window to door, and kept checking the clock.


I gasped in shock.


“What happened?” I managed to croak.


“He went up on the garage roof with a shovel to scrape the snow off the plywood.”


Bill’s fall off the two-and-a-half-story garage roof was so much bigger than me.


I had no choice but to cry out to God during those first dark hours. By the time Mike had called, the kids were in bed and it was too late for me to ask anyone to come over.


Early Thanksgiving morning, I curled my hair and dressed in red, Bill’s favorite color on me.


And my heart felt as crushed and swollen as his poor feet. They looked like footballs resting on the pillow at the foot of the raised hospital bed.


In the waiting room I picked up a paperback Bible. Many verses were familiar, but The Psalms drew me to acquaint myself with God on a personal level.


His Word, since I was too full of shock to form my own prayers, became my prayer. And it was my only solace for three days while we all waited for the surgery Bill’s “broken eggshell” heels.


I took that Bible home and never considered it stealing. God had given me an incredible gift.


What an eventful year 1975 had been. In February, we bought an acreage and planned our dream home.


In late April my father was murdered.


And our son was born three weeks following that event.


That May, the basement was dug and we started framing our home.


During Bill’s surgery, I recalled the year’s craziness. I also devoured the Word and prayed some more.


Bill was a straight-commission insurance salesman and he didn’t work for three months.


I was grieving through the traumatic unanswered questions concerning my father’s homicide, and the way my mother was not handling it at all.


Before Bill’s fall my prayers had mostly been by rote, or whenever I felt the real need to pray, I’d recite the Lord’s Prayer.


Eventually, I watched in horror as the six-inch steel pins were yanked from Bill’s ankles with a huge pair of pliers.


Praying through the Psalms and the events that year prepared my heart for the next April when I realized amongst all the blessings, Jesus had been missing from my life. I prayed the most vital prayer of all: the sinner’s prayer of salvation.


My hope is ever in Him and He is only a prayer away. 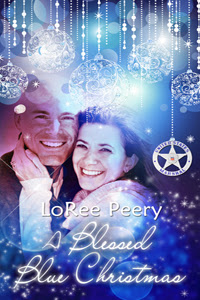 Dahlia Delisi has poured her life into her store, The Blue Dahlia.  Once her faith was strong, and her life was on a different course.  But when Sloan Letheby left town, Dahlia drifted away from God.
Sloan Letheby has been transformed. His brush with death brought new meaning to his faith in God, and he needs to right old wrongs.  However, there's a murder plot in the way of his reunion with Dahlia.  Can he find a killer before it's too late?  And can Dahlia accept him...and God, back into her life?

LoRee Peery is a lifelong Nebraskan who thanks her mother for teaching her to read when she was four. LoRee has devoured books ever since.

She and her husband have tackled some interesting projects over the course of their married life. For one, they built the home they live in with their own hands. They used to want more acres further away from city life, but one day LoRee realized they had their “greener on the other side of the fence” already. All it took was removing the hedge made of trees and bushes.

LoRee feels grounded in her sense of place and considers it a blessing to have lived most of her life in the country. She is also blessed to have five children and eleven grandchildren. www.loreepeery.com
https://www.facebook.com/LoReePeery


Purchase link for A Blessed Blue Christmas
Posted by Christine Lindsay at 9:06 AM