WHEN THE MIRACLE ISN'T WHAT YOU EXPECT--by Rachel Phifer

I was looking for a miracle. I’ll admit that miraculous answers to prayer in my life have been few and far between, but I’ve had them, and a miracle was most definitely what I needed now. My family had erupted into a volatile mess. Our finances were dwindling and my health wasn’t that great either. I prayed, oh I prayed for that miracle.

In the meantime, inspired by Ann Voskamp’s One Thousand Gifts, I started a notebook of gratitude. At first, it seemed laughable. Give thanks? I couldn’t even breathe.

But as I took my daily walks, I began to wake to things that had slipped by unnoticed in my focus on my many pressing problems. The way the massive oak tree on the creek slimmed into a silhouette at dusk. The mother egret guarding her chicks with her wings. The smell of baking apples coming from a neighbor’s house. Gentle sunshine warming me into a sense of well-being. My walks began to seem full of little gifts from the hand of God.

For months prayer had been impossible. You know how Charlie Brown’s teacher speaks: “Wah, wah, woh, wah, wah.” That’s what reading the Bible had become for me. There was just too much static in my head to make sense of God’s words. But I began to make a scrapbook of my favorite scriptures and illustrate them with pictures I found on Google Images. Somehow, cutting, pasting and illustrating the lines of comfort and promise made them speak again. I interspersed the lines of scripture with poetry, quotes and snippets from my book of gratitude. That scrapbook kept me going.

There were no lightning strikes. My prayers didn’t bring healing to my family or financial situation.  It became increasingly clear that there would be no miracle on a silver platter. But as time went by, I began to hear again, see again, feel again. I could pray again. Here and there, I felt good again because

I knew God was beside me, faithful in the midst of chaos.
Hearing of miracles from men and women who have fed orphans and smuggled Bibles and overcome drug habits builds my faith to no end. But I’ve experienced the daily miracles of fallen leaves the color of wine, restoring psalms and long lunch dates with my sister. Whatever life is, it is sacred.
About the author and her debut novel
The Language of Sparrows: 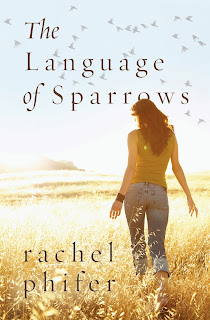 Brilliant and fluent in too many languages to count, 15-year-old Sierra Wright can't seem to communicate what is important to her in any language.

Though April Wright stubbornly keeps an upbeat attitude about her daughter's future, she has let her own dreams slip away. Just across the bridge lives old Luca, scarred from his time in a Romanian gulag years before. Though he has seemingly given up on people, Sierra is drawn to him despite his prickly edges.

Bio:
As the daughter of missionaries, Rachel Phifer grew up in Malawi, South Africa and Kenya, and managed to attend eleven schools by the time she graduated from high school. Books, empty notebooks and cool pens were her most reliable friends as she moved from one place to another. She holds a B.A. in English and psychology, and lives in Houston with her family.


Posted by Christine Lindsay at 1:03 PM