WHAT DO YOU SEE---by Valerie Comer 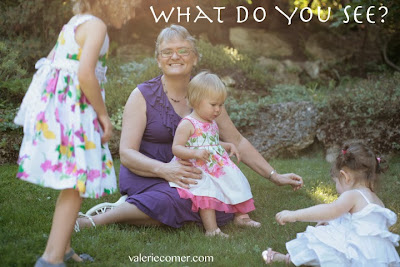 When I look in the mirror I see a middle-aged woman with a too sharp chin—and sometimes a too sharp tongue to match. I see a little too much pudge—and that goes for my motivation many days as well as my body.

I have three young granddaughters, age three and younger. What do they see when they look at me? Do they see the same flaws? No. They know any sharp words coming from my mouth are for their own good. "Hot!" I say when they reach for the fireplace. "Gentle!" I say when they squeeze the kitties exuberantly. What I see as flab, they see as snuggly.

Not too much snuggly, though. They're independent, busy little girls!

In the eyes of these little ones, I am a delight. I read to them, I dress the dollies for them (again and again), I bounce on the trampoline with them, I tickle them. They love me unconditionally and enthusiastically because of who I am: their grandmother, who loves them fiercely because they are mine. Not because they are adorable or precocious—though of course they are—but because they belong.

How can I ever doubt God's love for me?

Yes, I have flaws. I've sinned, and it seems I keep doing it. God should shake His head and give up on me, but He doesn't. He doesn't see what I see in the mirror. He doesn't even see what my granddaughters see. He sees someone He's redeemed through the death of His son. He sees me washed clean, the done deal He's already declared and will be revealed.

He is the daddy heart that responds to His child. It doesn’t depend on my track record or whether I’ve performed eighteen good deeds today. It’s reliant totally in my identity as His creation. I belong.

Love isn't performance based. God's love is identity based.

"The Lord will take delight in you, and in His love He will give you new life. He will sing and be joyful over you." Zephaniah 3:17 (GNT)

Can you imagine? God delights in me—in you. He sings love songs over us. Loving us brings Him joy.

I know these words, but I still struggle with them. As they swirl around me, seeping into the core of my being, the characters in my novels search for belonging, too. They struggle with their identity in Christ along with the other problems I throw their way.

Josephine Shaw in Raspberries and Vinegar is no exception. She's looking for a place to belong. She thinks it is a physical place, but discovers, as I have, that it is so much more. So much deeper. So much more real. 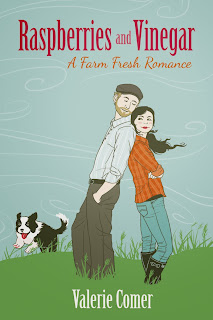 Josephine Shaw: complex, yet singleminded. A tiny woman with big ideas and, some would say, a mouth to match. But what does she really know about sustainable living as it relates to the real world? After all, she and her two friends are new to farming.

Zachary Nemesek is back only until his dad recovers enough to work his own land again. When Zach discovers three helpless females have taken up residence at the old farm next door, he expects trouble. But a mouse invasion proves Jo has everything under control. Is there anything she can't handle? And surely there's something sweet beneath all that tart. 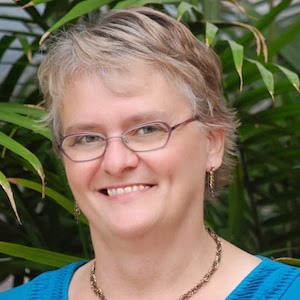 About Valerie:
Valerie Comer’s life on a small farm in western Canada provides the seed for stories of contemporary inspirational romance. Like many of her characters, Valerie and her family grow much of their own food and are active in the local foods movement as well as their creation-care-centric church. She only hopes her characters enjoy their happily ever afters as much as she does hers, shared with her husband, adult kids, and adorable granddaughters.

Valerie writes Farm Lit with the voice of experience laced with humor. Raspberries and Vinegar, first in her series A Farm Fresh Romance, released August 1, 2013. Visit her at http://valeriecomer.com.

Posted by Christine Lindsay at 8:33 AM