I hope you enjoy the short excerpt from Heavenly Haven below. This is my latest release, a short, inspirational, romantic, Christmas story---Christine Lindsay
HEAVENLY HAVEN---

Avalanches happen to other people, not us. Marital problems
happen to other people, not us, especially nine days before Christmas. At least that’s what Jack and Shaina Burke thought. Married for ten years, avalanche control expert Jack, and Shaina, only wanted to celebrate their December anniversary in a romantic way, until the shifting snows on the mountain bring havoc tumbling down upon them. Can they find renewed love in a heavenly haven of snow? 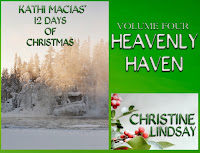 Eighteen-month-old Zoey knew a smattering of words, but hung on to everything Scottie said, as if she considered his commentary with all judiciousness. She adored her big brother, and he basked in that adoration. But his one-sided conversation on Ninjas possibly repelling down the mountainside and attacking their vehicle grew boring after a while. Soon Scottie was asking to stop for something to drink.

Waving her hands encased in scarlet mittens, Zoey added her own request in a jumble of words which Scottie translated. “She wants a coffee break, Mama.”


“It won’t be much longer, kids. Daddy’s camp is about two miles aw—”


Shaina’s words were cut off by the muffled echo of a rifle shot.


The sensation of ice trickled down her spine. Dear God, surely she wasn’t in the area that Jack was actually working!


The snow on each side of the Jeep was a foot deep, nothing the vehicle couldn’t handle. Still, she craned her neck to stare out and upward through the windshield.


At the first sign of the white cloud wafting over the treetops, her heart and soul froze. Sickening knowledge filled her mind with cold clarity. It was happening.


The snow landed on the vehicle’s hard top and from the front, engulfing them in a heartbeat. Cutting off all light. Something slammed into her face. She couldn’t breathe.


The Jeep rocked. Then came to a solid stop. Her befuddled mind took in Zoey’s screeching, Scottie whimpering, “Mama?” and the pain in her face.


The airbag deflated and she could breathe. That was what had punched her in the face. “It’s all right, babies, we’re going to be okay—don’t be scared.” Thank God they’d remained upright on the road, and the avalanche hadn’t sent them careening down the mountainside.


She wiped a smear of blood from her nose and reached behind to check the kids. Their car seats had kept them safe. They seemed fine, but Zoey cried out, “Dadda! Dadda!”


Had the slide fully ended? She prayed it had. Suffocation was the major reason for death during an avalanche. Her brain clicked into the list of procedures Jack had gone over with her time and again. Conserve air and energy. Don’t jeopardize your air pocket.


The remaining air inside the closed Jeep would keep them alive for a while. But how deeply were they buried? They were now at the mercy of others to rescue them.


Was anyone nearby? Don’t shout. Shouting wastes your air supply. 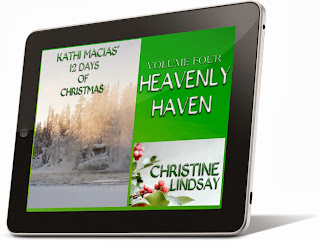 Heavenly Haven, an Ebook is available on Barnes & Noble, Amazon, and Kobo.
Posted by Christine Lindsay at 6:55 PM