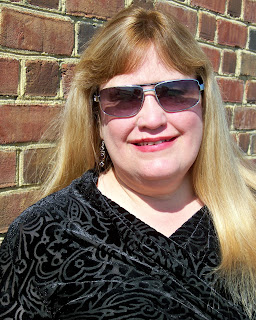 My guest today is my dear friend, of whom I am a huge fan. Laurie Alice Eakes.
A high-pressure steam cleaner roared through the open doorway beside me. A city full of strangers spread out beyond the locked gate behind me. And at my feet lay seven bags of groceries—the large, reusable bags, not the little plastic ones--and my Seeing Eye dog.

I had no idea how I was going to get food, dog, and myself thirty feet to the elevator, on and off the elevator, and another forty feet down the hallway to my apartment.

I was the new girl in town. Well, hardly a girl, and I was new in town. My husband was at work, but we couldn’t wait until Saturday for more food, so I took a taxi to and from the store, where they were wonderfully helpful. The taxi driver was wonderfully helpful. A store employee helped me get my groceries. The taxi driver carried my bags up the walkway to the gate, but he couldn’t come further.

Though he is sweet and helpful in other ways, my dog, at this point, was more a hindrance than a help. I couldn’t carry bags in both hands and hold onto his harness. And that in itself created a problem. The building deserves the appellation “complex”. It’s layout was just that. Disorientation plagued me the first few weeks I lived here, and I was within that timeframe. Was the elevator straight ahead or to my left? I usually took the steps. At that moment, I just wanted to cry.

Feeling helpless doesn’t come easily to me. Because I have had so many people tell me I can’t do something, I have to prove that I can—yes, even to the Lord.

So there I stood with literally too heavy a burden to bear surrounding me, and the Lord heard my cry. He dried my tears of frustration, loneliness, and humiliation before they grew beyond a prickle behind my lids. He used this moment to bless me.

While I stood there contemplating what to do, the steam cleaner fell silent. A man emerged from the apartment and began to speak to me in /Spanish. I understood little of what he said, and I understood the context and the way he tapped my arm, then picked up all seven bags.

They probably weighed as much as he did. I expected him to leave them in the elevator and thanked him. But no, no, he carried them all the way to my apartment door.

As I unpacked my groceries, I reflected, as I have so often found reason to do, the Lord uses little moments of helplessness to show us how He cares about even the smallest drawbacks in our lives.

“Eakes has a charming way of making her novels come to life without being over the top,” writes Romantic times of  bestselling, award-winning author Laurie Alice Eakes. Since she lay in bed as a child telling herself stories, she has fulfilled her dream of becoming a published author.  with the release of Choices of the Heart, The Midwives #3, she sees her twelfth book published, in addition to two novellas with more novels and novellas releasing over the next three years. A graduate of Asbury University with a degree in English and French, and  Seton Hill University, with a masters degree in Writing Popular Fiction, she also teaches writing and gives inspirational talks.
She lives in Texas with her husband, dogs, and cats, where she enjoys long walks, rainy days, and knitting—rather badly. 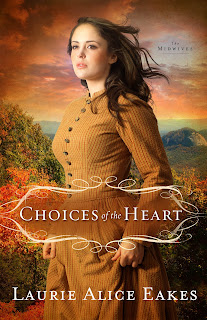 Choices of the Heart
A Novel by Laurie Alice Eakes

She thought she had left her old life behind . . .

Esther Cherrett comes from a proud line of midwives and was trained by her mother to take over the family calling. But when a terrible scandal threatens all she holds dear, Esther flees, taking a position as a teacher in the wild western mountains of Virginia. But instead of the refuge she was seeking, Esther finds herself in the midst of a deadly family feud—and courted by two men on opposite sides of the conflict. All she wants is to run away again.

But could it be that her past holds the key to reconciliation—and love?

In this gripping story of trust, deception, and bittersweet loss, you’ll discover the true meaning of choices of the heart.

“The gifted Laurie Alice Eakes has done it again with a page-turner romance. The wonderful period detail sucked me into 1840s Appalachia, while the realistic characters and tender romance kept me reading late into the night.”—Linda Goodnight, Carol and Rita Award–winning author

Laurie Alice Eakes is the author of Lady in the Mist, Heart’s Safe Passage, A Necessary Deception, A Flight of Fancy, and several other novels. She won a National Readers Choice Award for Best Regency in 2007 for Family Guardian. Laurie Alice writes full-time from her home in Texas, where she lives with her husband and sundry dogs and cats.

Where you can buy Choices of the Heart

Or wherever you like to buy Christian titles.
Posted by Christine Lindsay at 12:30 AM