My guest today is friend and fellow Christian fiction writer, June Foster. She's going to share the tender and wonderful adoption story of her husband's brother.


He's still my big brother, isnt he? by June Foster

My husband, Joe, loves to tell a story about his parents when they were childless. His mom and dad were of the Catholic faith, so after they'd been married for eight years with no babies on the way, they decided adoption would be a good route to begin expanding their family. They paid a visit to the Catholic Charities in Birmingham, Alabama. There they found a darling, four year old boy named Marshall and brought him home to be a part of their family.

For reasons known only to God, after two more years, Mrs. Foster found she was pregnant and delivered her first biological son, Mike. After that came my husband Joe, then Pat, then Helen, and finally Steve. Marshall was thrilled with so many brothers and a sister.


The story goes that Mrs. Foster decided that the two older boys, Mike and Joe, needed to learn that their oldest brother was adopted. She called a formal family meeting and made the solemn announcement about how Marshall came to their family.

At the end of the meeting, Joe questioned his mother, "Marshall still gets to be our big brother, doesn't he?"

Even though my husband left for the army after he grew up, he and Marshall remained in touch. When we moved to Lacey, Washington where he lived, Marshall mentioned to Joe he'd be interested in finding his birth family but had no idea how to go about it. Since Joe had a good knowledge of the computer, he offered to help. Alabama, which had been a closed adoption state, opened their records up in the early 2000's, and Joe was able to find out some information.

Marshall was sorry to hear his birthmother had passed away ten years before but was encouraged to learn he had a sister. Joe couldn't find a contact number for Marshall's sister, but located a number for Marshall's niece, his sister's daughter. Marshall was too ill-at-ease to make the call so Joe dialed the number while Marshall looked on clasping his hands tightly in front of him.

When a woman's voice said hello, Joe said he was phoning on behalf of his brother, Marshall Foster, and that Marshall was looking for his sister. Joe asked if he have the right number.

My husband thought the woman had hung up as heard nothing but silence, then a sob carried over the phone. Finally, the woman said she believed he had the correct number. She was Marshall's niece and said her mother, Marshall's sister, had been looking for him for years, always hoping to meet her brother. Joe asked if the mother lived in the same town, and again, the niece let out a sob. She said her mother had died two months before.

Marshall was devastated, but his niece's promise to come to Washington to visit him with her other sister the following July, cheered him, and they made plans. But in June, just two days after Marshall's birthday, he died of cancer, never getting to meet even his nieces.

This sounds like a sad story, but wait.  There's more. During the process of helping Marshall to find his birth family, my husband and I had occasion to tell Marshall about our awesome and powerful God who sent his son Jesus to the earth to die for our sins. We shared how to have faith in the Savior and about our final home - Heaven.

Marshall began going to church with us and gave his life to the Lord at Thanksgiving that year before the following summer. He started coming to Bible study in our home. We were warmed when he told us how he'd always felt empty. He pointed to his heart. He said he was no longer empty inside, and he finally knew who his real Father was.

Joe and I were present on that day in the middle of June when Marshall went to be with the Lord. I've never witnessed anyone die before, but I can say, truly, without hesitation, that the experience was beautiful. And I know that someday we'll see this wonderful man again when we join him in Heaven to be with Jesus forever.

Thank you June for being my guest today. And readers take a look below at June's latest release Deliver us from Evil 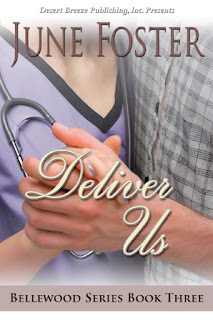 The fraternity co-ed who coaxed Jillian Coleman upstairs that night is no more than a blur in her memory, but the consequences will haunt her forever. Ten years later, Riley Mathis, now a Christian, can't tell Jillian he's the father of the child she aborted. The truth will destroy them.

Excerpt from Deliver us From Evil

A man on his knees with his back to her scrubbed the tile with a large brush. His muscular shoulders visible through his brown janitor's shirt tensed and relaxed with every stroke. She'd never seen a custodian put so much effort into his work as he sank the bristles into the tiles.
He stood and pulled his mop from the back of his cart. With long swipes, he drew the sponge over the suds, and rinsed it in the clear water of his red plastic pail. When he glanced up, their eyes connected.
Riley? Her pulse jolted. Did he work…?
The door to the OR flew open, and Jett walked out. He removed his mask and shrugged his shoulders. Without slowing his pace, he whisked past her and lowered his voice. "A lucky call this time, Jillian."
Lucky call? How could he say that? A precious life had held in the balance.
Jillian's exhausted body folded into a chair at the end of the hall near the OR. The pent-up emotion wouldn't wait any longer. A baby had almost died today. Sobs shook her shoulders.
"What... what did you say to her?" A quiet masculine voice muttered. With a few steps forward, Riley peered at Jett. "I think you owe her an apology." He dropped his gaze to the floor.
"What the…" Jett drew his fist in front of him.
In disbelief, Jillian stood transfixed.
Jett glared at Riley, tapping his chest over and over. "Who do you think you are, you lowlife?"
She bit her lip and rushed to them, grasping Jett's arm. This couldn't be happening.
With an easy shake, Jett brushed her away. He curled his lip and grabbed the front of Riley's shirt with both hands. "This is none of your business." He released Riley, placed his palms on his chest, and shoved him hard.
When Riley lost his footing on the wet floor, he stumbled backward and landed on his rear-end. Scrambling to his feet, he glanced back at the area he'd cleaned. He shook his head. "And I deserve to be fired. I'm sorry."
"Riley, wait." Jillian took a few steps toward the men again. "Jett, calm down."
She worked her way between Jett glaring at Riley who hung his head like a bad dog. "Why did you say that to Dr. Camp?"
"I…I thought he said something that upset you." Riley lifted tortured eyes. "Your face paled."
Riley must've thought Jett spoke an offensive word to her. Her heart softened. He had only wanted to shield her from pain. To protect her. Compassion for the man, even concern, built in her. The sweet guy thought he was doing the right thing.
Jett held two fists in front of his chest, still on guard.
"Riley is a friend." She blew out a breath." I'd appreciate it if you didn't make an issue of it. He misunderstood the situation."
But had Riley actually misunderstood Jett's intensions? What Jett said had hurt her. A lucky call.
"A friend?" Jett shrugged. "Yeah, whatever." He pressed past her. "Forget it. I wouldn't want to see his minimum wage check yanked away from him."

June Foster is a retired school teacher with a BA in Education and a MA in counseling. She writes full time and travels in her RV with her husband Joe. June has written four novels for Desert Breeze Publishing. The Bellewood Series, Give Us This Day – February 1, 2012, As We Forgive – September 1, 2012, and Deliver Us – April 1, 2013, and Hometown Fourth of July – July 1, 2012.  June loves to write stories about characters who overcome the issues in their lives by the power of God and His Word. June uses her training in counseling and her Christian beliefs in creating characters who find freedom to live godly lives. June's book, Ryan's Father, will be published by WhiteFire Publishing January 2014.

June Foster's webs & blogs
Author - where God has the answers