TRUTH IS, I WANTED TO DIE--by Sandi Rog

Christine here: Today and next Monday, my dear friend and writing peer, Sandi Rog, will share her battle with cancer. You won't want to miss the telling of her inspirational victory, starting with chapter One today.


The following wasn’t easy to share, and it may not be easy to read, but I have to be honest. There’s always a lesson to be learned in life, and this was a powerful one for me.

Not sure how many read my Facebook, but there was a time I wrote: “Even if I wanted to die, you guys aren’t going to let me!” It was true. When the announcement of my cancer came out, prayer warriors sprang up from out of nowhere, and I knew I wasn’t going to have my way!

You see, when I found out I had a tumor on or near my brain, all I could think of was FINALLY I can be done with this life! I was exhausted (from already fighting MS and just the stresses of this planet). My life has been hard. I know, I know. I think most of us can say that. Some of you are probably familiar with my story of wanting to die at age five after getting a beating from my dad. I couldn’t wait to grow up to get out of the abuse and start running my own life, make my own choices. But I soon came to learn that you don’t always reap what you sow (not on earth anyway; it’s all waiting for us in heaven; Hebrews 4 talks about the believer’s rest).

Anyway, while I was sitting in the hospital and the doc told me that I had a good chance to “fight this thing,” my family cheered all around me (I had my mother, a couple aunts and my grandma there with me). But while they were cheering, . . .

Heck, I was prepared to leave on a GRAND TRIP, something a million times better than going to Hawaii! I was going to HEAVEN to finally be with my Lord and Savior! I’d already written posts on my blog about what I think it’d be like to meet Him. But my doctor’s words made all those dreams of FREEDOM come to a screeching halt.

Now I had to FIGHT AGAIN?! I didn’t want to fight anymore! I was done FIGHTING! Please God, just let me DIE already, will ya? I was EXHAUSTED from the trials of this life.

Yes, I’m afraid that was my thinking.

I won’t name all the trials and heartache and crisis’s I’d faced up until that point. Let’s just say, MS was taking its final toll. It was the icing on the cake, so to speak.

Yes, I had FOUR children and a loving husband (still do), but I saw absolutely no value in myself. I figured, my mother-in-law would do a better job raising my kids than I would, so I could die and let her do it! And my hubby could easily remarry. He’s a great catch. Truth is, I was ready to throw in the towel.

But God had other plans.

Many of you realize my diagnosis came on the very day my first book released. I didn’t even get to have the pleasure of fully enjoying that success, the type of success every writer dreams of experiencing. To me, it was just another disappointment that I would live with . . . story of my life. I wasn’t allowed to reap what I sowed. Not on this planet, anyway.

But . . . it was a blessing. Bittersweet, I might add. One of the greatest successes of my career was shared on a day I was told I might not have long to live. God managed to soften that blow. Interesting. Still, I was making my plans. I was going on a trip, a heavenly trip! Whooo, hooo! People on earth could enjoy my book (I’d just finished the second one), so my kids would have that part of me. I’d accomplished all my goals.

As the weeks of chemo went by, thoughts started penetrating my mind . . . .

Who would be able to sing to my kids the way that only their mother could? Who would prance in to Chelsea’s room in the morning (when Mom was feeling like herself and not like MS had her in its grip), and sing to her and kiss her ALL OVER? Who would teach my kids to laugh at life and their mistakes? Who would teach my son that God planned for him to grow bigger than his sisters so he can protect them, and protect those weaker than himself? Who would love them as deeply as only a mother can?

~~~~Christine here: Please come back next Monday for the next chapter of Sandi's battle.

and her blog on beating cancer beatcancerwithb17.blogspot.com
And take a look at Sandi's awesome books that are in my group of favorites. She's a historical, adventure-epic style writer, with strong spiritual threads, and deep romance. I highly recommend all her novels. 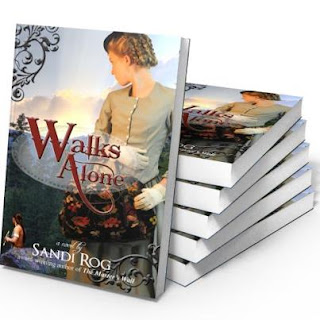 Purchase link for The Master's Wall