MORE THAN CONQUERORS: A Story from a Communist Prison


A Story from a Communist Prison by Rachel Phifer 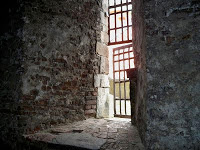 The research I did for my last book took me to accounts of the Eastern European gulags and to Gheorghe Calciu of Romania. Put into prison for broadcasting sermons to youth, he was tortured, starved and isolated. Ronald Reagan took a special interest in the man’s welfare and what he represented, so the prisons were especially severe with him.
But it was almost comical how the plots of the guards never ceased to fail. In one instance, they put two murderers into his cell, hinting at an early release for them if Calciu should be killed. Within days, he found the two men kneeling with him as he prayed.

On Easter morning, one of the harshest guards and a determined atheist entered his cell. Calciu called out the traditional Easter greeting, “Christ has risen!” He expected a beating for the words. Instead, the guard answered with the reply, “Truly He is risen!” Then the guard shook his head, as if confused by the words that had somehow left his mouth, and walked out.

When Calciu left prison, I won’t say he was unaffected by the years of torture. He said he still found himself panicking at the sight of policemen years later, but he continued praying for his torturers, and those who knew him described him as a man "surrounded by a cloud of joy."

In my research I was expecting stories of broken men, and I’m sure there were many. But there were many who grew stronger than ever in prison. Through beatings and starvation, through long nights of sleep deprivation and days of hard labor in the mines, through mocking and psychological torture, as their hair turned prematurely grey and their bodies wasted, their spirits somehow thrived.

Calciu said prison was the happiest time in his life, because it was there Christ had been most present. And he wasn’t the only prisoner who said this. It was in the prisoners’ absolute poverty that Christ came to them – really came to them.

Sometimes it seems that to understand heaven’s ways you have to look at life through a mirror – your expectations have to be seen in reverse. To give is to grow rich. To die is to live. To love your enemies is to overcome them. But the most amazing to me is that to suffer is to know joy. The less we have – material goods or emotional goods – the more God is able to give us. And that’s where the conquering comes in. What is meant to break us, when God draws us near, instead makes us whole.

Rachel Phifer is a wife, mother of two beautiful girls, contracts manager and writer. In her fiction, she explores both the riches and sorrows of God’s world, and searches out the Light that gives hope to both sides of the experience. Her most recent novel, tentatively titled, The Language of Sparrows, tells the story of a friendship between Sierra, a teenage genius who is failing school, and Luca, an old man who spent his youth in a Romanian gulag.