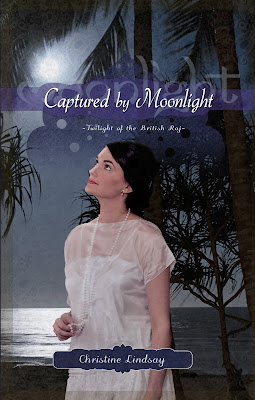 Here it is at long last, the front cover for Book II of the Twilight of the British Raj series---Captured by Moonlight. Stay tuned for

May 1----release of the printed book

After a daring rescue goes awry, Laine Harkness and her friend Eshana flee to the tropical south of India…and headlong into their respective pasts.

Eshana, captured by her traditional uncle and forced once more into the harsh Hindu customs of mourning, doubts freedom will ever be hers again, much less the forbidden love that had begun to flower.

Amid cyclones, epidemics, and clashing faiths, will the love of the True Master give hope to these searching hearts?
Posted by Christine Lindsay at 9:27 PM No comments: