SHE WAS WEARING AN EYE-PATCH !!!

This week, COTT is featuring a Clash of Leading Ladies. But just how are interesting characters born? Here's one author's experience. Welcome Carol Moncado.

Do you ever wonder how authors come up with their characters? I've heard of authors who fashion their main characters after a barista at their favorite coffee shop or some guy on the bus who looked interesting. The further I get into my writing journey, the more I find my characters often come from real life. For instance:

The weekend before Easter, I was diagnosed with Bell's Palsy - where half your face just stops working. Fun.
Not really, but it's great story fodder. That's me. The story is one I started recently. 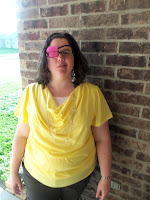 She was wearing an eye patch.
At church.
On Easter.
It might have been what drew my attention to her, but it wasn't what kept it. She stood there, singing along with the praise and worship band, her hands raised. Worshiping her Maker with abandon. But only half of her face worked. The whole thing lit up but only half of it moved. The half with the eye patch seemed to be paralyzed, but it didn't bother her.A pink eye patch.

Now, to be fair, the heroine is younger, skinnier, with darker, straighter hair than me, but that's where the idea for her came from.
In February, Travis [one of the shift managers at my favorite Panera] informed me I needed to name a character after him. Travis-with-the-faux-hawk became the hero in a manuscript. 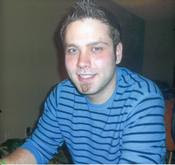 I flopped into the recliner and ran my hands over my face until my fingers furrowed rows in my faux-hawk. The one that made the kids think I was way cooler than I really was.

But Travis won't see his name in print. A week ago, he was in a car accident. At age 22, he left this life - leaving behind the love of his life and two children.
I'm deeply saddened by news of Travis' passing. To me he was more than 'just' a shift manager at the Panera I frequent. He was a nice guy I loved to chat with. Another manuscript I planned to work on is about a widow. That's all I knew until last week. Now, she's a widow with young children a few years after a senseless tragedy.

Twenty-two is too young to be a widow.
Bethany Sheer knew this with absolute certainty.
And even though twenty-two had passed her three years earlier – along with her husband, the love of her life and the father of her two children – she remembered all too clearly what the pain tearing through the heart of the young woman on the news felt like.

Someday, I hope to be able to share Travis-with-the-faux-hawk with his family. To let them know that he touched my life. That he inspired a character in a novel – and so did they.
Because the best inspiration is what we find all around us.

When she's not writing about her imaginary friends,Carol Moncado is hanging out with her husband and four kids in the big yard of her southwest Missouri home, teaching American Government at a community college, reading, or watching NCIS. You can follow her ramblings on her blog .

**Be sure to head over to Clash of the Titles and cast your vote today!

Posted by Christine Lindsay at 9:48 AM