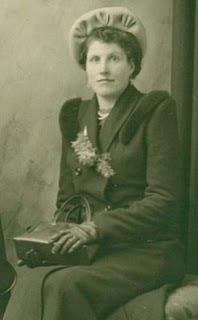 I was 12 years old and my grandparents had just come from Ireland to visit us in Canada. It had been 8 years since I last saw my grandmother, who I called Nanny, and my grandfather, Granda.

They opened up their huge, light blue suitcase and brought out all sorts of gifts for us from the family back home. Then Nanny gave me a small box, and inside was a gift that as soon as I opened it, took me back to those vague days of childhood when I was but 4.

I had been born in Ireland, but when I was 4 years old my mother and father, as well as my baby sister and I immigrated to Canada. Back in the sixties flights across the Atlantic were expensive, so it wasn’t too different for us than it was for those immigrants who’d come over in the steerage of ships. When we had said goodbye at the airport in Belfast, Northern Ireland, all of us thought we’d never see each other again.

But 8 years passed, and each day I thought of my grandparents who I missed terribly, especially Nanny. Letters were never enough.

One day when I was 11 years old I was at a friend’s house playing, and I phoned home. My mother said, “Hurry up, I have a big surprise waiting for you.”

I remember running down the street, wearing a cotton dress and white ankle socks with black Mary Jane shoes like girls did in those days. All the way home, puffing out of breath, all I could think of was, what . . . or who . . . my mother had waiting for me.

One surprise that would thrill me would be if my grandparents were sitting in the living room when I got home. It had to be them. It just had to be. Had they come from Ireland to visit us at long last?

But when I got home my mother indeed had a surprise for me. I don’t remember what it was. Something nice, I’m sure. But it was not my grandparents. How foolish I felt. Of course they wouldn’t turn up just like that. A flight across the ocean cost a great deal.

The day did come though, the following year. And I was told about it months in advance. My grandparents did fly over.

And there they were sitting in our living room in Canada and opening up their huge, light blue suitcase to shower us with gifts.

Nanny handed me the little box, and I opened the lid. It was a small bottle of perfume made for a child with the plastic figure of a tiny leprechaun for the lid.

I popped open the lid and brought it to my nose and sniffed.

I was only 4 when we’d left the emerald isle. So many things I couldn’t possibly remember, except the vague, shadowy images of my grandmother especially. But this violet scent was one I had smelled before.

It took me home to the land of my birth, to the family I missed, to those moments with my grandmother.

I was home.
Posted by Christine Lindsay at 12:05 AM