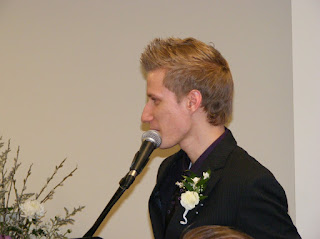 Being a writer in pursuit of a writing ministry is in my opinion one of the most effective ways the Lord has of shaping a character.

The writer’s character this is.

It’s not so much in the hearing of the call, because God already wired writers to be intuitive. They usually respond to that urging of the Holy Spirit and start to put words on paper pretty young.

And it's not even the sacrificial efforts that go into learning the craft, buying the writing books, because writers enjoy learning how to write.

What shapes a writer---or perhaps any creative person's character---is in learning how to accept rejections, failure, lack of success.

In Prov. 27:17, it says “as iron sharpens iron so one person sharpens another”. The writer’s character is then refined by the willingness to accept hard critiques on their work. Granted most critiques are given in tough love, but for some it’s hard to accept those suggestions or opinions about their work.

Critiques like iron chip away at pride, and force the writer to accept that someone else knows a bit more than they do, paving the way for that writer to yield more and more to the direction of the Holy Spirit.

The rejections of your query letters, later of your manuscript can chip away at that pride. But if that writer is listening to the Lord, they will simultaneously hear His Spirit, saying, “Keep on going. I am rooting for you.” And faith is forced to grow.

It’s not easy to pursue a ministry in Christian Fiction. Many of us sometimes wish the call to write had never come, because there is so little in the way of payment for those long, long hours, years of writing.

But we keep on because we feel the Spirit encourage us in spite of the disappointments, the unmet dreams.

This summer I was encouraged through a prayer that at first seemed unanswered. The prayer had nothing to do with my writing career but my son’s college career.

Rob returned from Briercrest College at the end of April, and we’d been praying all the academic year that he’d get a good job this summer.

The end of May came and still no job. But his knee had been bothering him from a school event months earlier. Our family doctor confirmed there was something wrong and set him to a specialist. We dreaded that appointment because if our son needed knee surgery this could mean a date in the middle of the school year, causing him to postpone his graduating year.

On May 30 we went to the surgeon’s office, and were amazed that he could have a surgery date of July 12, which would give him enough weeks to recuperate before returning to school.

Looking back we could see that the Lord had a perfect plan all along. He didn’t get the job we’d prayed for, but the Lord knew exactly what our son needed this summer.

It’s the same with the writing career. Our prayers are not necessarily answered the way we expect them. But if God has called you to write about Him, then in due time, He’ll arrange the details.
Posted by Christine Lindsay at 10:19 AM