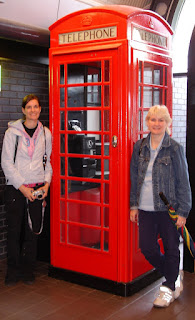 These past few weeks as I prayed for a part-time job I never expected to see God’s hand in such a quixotic way. All I knew is I wanted something different, some kind of environment that would feed my writer’s soul.

I never dreamed my new job would be in a Tea Shoppe of the olde curiousity style emporium like you would read about in a Dickens’ novel.

So there I was yesterday, at 53 years old, with a number of careers behind me, donning the black apron of a waitress for the first time. Though it was hard to get to work when my gaze kept snagging on display cases filled with everything British from years gone by.

One of my jobs in the morning is to turn on all the lights in the museum upstairs. I so wanted to explore those rooms devoted to the Titanic, showing replicas from on board the ship, and the number of books on that vessel alone. Then there was the Royal Room where a person can study up on the English monarchy, and another room my fingers itched to explore, containing a number of military uniforms.

Once the lights are on though, I’m downstairs in the tea room. But as the day goes by I dash between the tea room and the bakery, passing the cases that hold items such as helmets the British police would have worn during various time periods. Another case holds toys belonging to children during the war years. And I’ve only begun to explore !!!

But this blessing has 2 sides to it—I was being paid to serve customers in the tea shoppe. And if there’s one thing this British immigrant knows, it’s how to make a good cuppa and serve the pastries and cream buns that have delighted the British for centuries. They’ve asked me back to work next week, so I must have passed the test.

The menu alone thrilled me—fresh baked scones, Cornish pasties, Pickwick pies, and so much more. Each item is entitled by a character from a Dickens’ novel, such as Mrs. Nickleby’s Salad, Fezziwig’s Crumpets, Miss Peggotty’s Bacon Butty, Bob Cratchet’s Savoury Tray, Tiny Tim’s children’s tray . . . and then there are the desserts. But I have to admit my personal favourite are the scones served warm with strawberry preserves and Devon cream on the side.

On the other side of the tea shoppe and museum is the English Sweet Shoppe, and a section at the back that holds teas from all over the world. Those shelves with all those glass jars of teas will entrance me for a long time. So much to learn, not to mention what I glanced at on the way out of work last night--recipe books from every corner of the British Isles.

I should know by now how well our heavenly Father knows me, and how He blesses me with just the perfect thing when I leave the choices up to Him. He truly cares about me like He says, so much more than He does for the tiniest sparrow—yet He cares so much for them too.

Picture above is of my daughter and me in Great Britain a few years ago, standing by an old fashioned English phone box.
Posted by Christine Lindsay at 11:08 AM