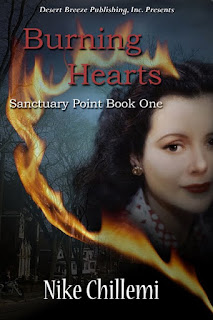 Today I'd like to introduce a fellow writer Nike Chillemi, who, like me has her debut novel coming out the same month as myself. Nike tells us how she wound her way through her novel journey to write this story set during World War II. You'll love the research she did on WW2 women's fashions alone. BURNING HEARTS is just the sort of book I love to read. I hope you will too.

Nike, tell us about BURNING HEARTS:

When I set out to write BURNING HEARTS I thought I was writing a suspense novel with tons of romance. But as my characters began to come to life I realized I was writing a novel of self-discovery. My heroine Erica Brogna and my hero Lorne Kincade not only discover their love for each other, together they embark on a journey that brings them into a closer relationship with God. Due to vastly differing reasons, both of them have had their childhood faith shaken.

I write character driven stories. It's funny how they take over. Erica of course is a seamstress, but as the story progressed she let me know she had a desire to design fashion. She became very fashion forward. This was fun for me because as a lover of the 1940s era, I'm a real vintage fashion aficionado. I'm a graduate of the Fashion Institute of Technology (NYC) and I worked for many years in the Bridal industry before my husband and I adopted and I became a homeschooling mom. I greatly enjoyed researching 1940s women's fashion trends for BURNING HEARTS.

I spent quite a few hours sifting through an immense amount of online information on fashion of the 1940s. Probably more than I actually needed to write the book. It was great fun to discover how women lived in that era. Due to the war effort, even though it was a time of austerity and fabric rationing, it was still a glamorous time. Women followed Hollywood fashion trends and enjoyed dressing up. Men were debonair. Courtesy was highly valued in human discourse in that decade. Oh, sure, there were louts, but they were called thusly. Nobody made excuses for them.

In the post war era, even a young woman of moderate means had quite an array of day dresses, skirts paired with high-necked blouses, and perhaps a suit for work, church, and going around town, and matching hats and gloves. Necklines were more relaxed for parties, receptions, and the like. Most women had a floor length or tea length evening dress, probably in rayon, as that was the new fabric. She'd also have several pair of pumps or heeled oxfords for street wear with matching handbags and a pair or two of evening shoes with their respective matching bags and hats. If she were a lady of modest means, she'd most likely get out her Singer sewing machines and copy the latest fashion trends.

The 1940s is often seen as a Golden Age. America had emerged from World War II as the undisputed world super power. People of the decade loved the movies and looked to the west coast to model a great deal of their own personal style from Hollywood trends. They looked to the east coast and New York City for sophistication, finance, art, music trends such as jazz. It was at that time that New York was dubbed the city that never sleeps. They also read Life and Look magazine which had a great influence on what was hot and what was not in that era. It was a great time to be alive and America shown like a beacon on a hill in that decade.

BACK OF THE BOOK BLURB:

Can a sheltered young seamstress, disillusioned by the horrors of WWII, escape an arsonist/murderer who has killed her employer and mentor, while trying to decide if she can trust the dashing war hero who’s ridden into town on his Harley—who some say is the murderer?

Erica Brogna’s parents doted on her and taught her to think for herself. Many boys she grew up with have fallen in the war, shaking her childhood faith. In rides a handsome stranger, at the hour of her most desperate need. A woman who is her best friend and mentor is trapped in a burning house. After making an unsuccessful rescue attempt, Erica stands by as this man rushes into the inferno and carries her friend’s lifeless body out.

Lorne Kincade can’t out run his past on his Harley Davidson WLA, the civilian model of the motorcycle he rode in the war. He’s tried. He’s been a vagabond biker in the year since the war ended. His Uncle Ivar bequeathed him a ramshackle cottage in Sanctuary Point, on the Great South Bay of Long Island, NY and now he’d like to hope for a future again, repair the miniscule place, and settle down. The only problem is, a young woman with hair the color of mink is starting to get under his skin and that’s the last thing he needs.

BURNING HEARTS can be purchased at Desert Breeze Publishing http://stores.desertbreezepublishing.com/StoreFront.bokThe novel is also available on Amazon Barnes and Nobel.

Nike Chillemi has been called a crime fictionista due to her passion for crime fiction. She is a member of ACFW and the Edgy Christian Fiction Lovers on Ning. She was an Inspy Awards 2010 judge in the Suspense/Thriller/Mystery category and a judge in the 2011 Carol Awards in the suspense, mystery, and romantic suspense categories. She is the founding board member of the Grace Awards, a reader's choice awards for excellence in Christian fiction. She writes monthly book reviews for The Christian Pulse online magazine. Burning Hearts is the first book in the crime wave that is sweeping the south shore of Long Island in The Sanctuary Point series.

Christine: Thank you so much, Nike, I hope you have great success with this remarkable book. It sounds wonderful.
Posted by Christine Lindsay at 12:05 AM