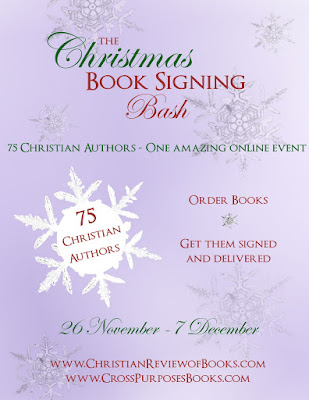 Beginning on the day after Thanksgiving and lasting ten days (26 November
- 7 December), this book signing will be an unprecedented online event. 75
of today’s favorite Christian Authors have come together to answer
questions, chat with their readers, and offer signed copies of their
books—all without leaving the comforts of home and hearth!

Readers can search by author, title, or genre at the Christian Review of
Books Christian Review of Books and then follow the purchase links to Cross Purposes Bookstore and buy autographed copies of each book featured. The authors will sign the books and ship them to the customers.

For a full list of participating authors, visit the Christian Review of Books

I hope you'll take a look at this fine selection of Christian novels and non-fictional work. These are people I am proud to be aligned with, the closest being WhiteFire publishing who has just given me a contract to publish my novel Unveiled, and the members of the International Christian Writers Blog.
Posted by Christine Lindsay at 12:00 AM No comments:

Now the day is here, it's a bit hard to find the words. But after 10 years of honing my craft and seriously pursuing a career in Christian fiction, I've just been offered a contract by WhiteFire Publishing for my historical, Christian inspirational novel, SHADOWED IN SILK which won the 2009 Genesis for historical under the previous title UNVEILED.

Its a story about...

Abby Fraser who only ever wanted to be noticed by those who were supposed to love her.

At the end of WWI she reunites with Nick, her British officer husband in India, and finds herself trapped in a marriage to a cruel stranger. She also finds protection, and truths she never expected to hear from Eshana, a former Hindu and child widow.

Major Geoff Richards, broken over losing so many of his men in the slaughter of the war, returns to his cavalry post in the Punjab. He remains true to his faith in Christ, but no longer believes joy can be found in this life. And back in India he cannot accept the inequality of his British peers toward Indian people, especially the callousness of the typical English memsahib. He also can't stomach the way Nick Fraser bullies his wife and little son.

Love for Abby...and joy for Geoff...seem impossible set against India’s canvas of glittering palaces, veiled women, dust, heat and poverty. As tensions rise in the Indian bazaars and alleyways, the British retaliate, ushering in the very thing they fear---the beginning of the end of the 300-year-old British Raj, and setting the stage for Gandhi.

Playing a part in that grander scheme, sinister enemies—-in the guise of friends and servants, and England's political enemy, Russia---draw Geoff, Abby and Cam, Eshana, and Nick out under the brassy sky of an inhospitable Afghanistan desert.

It is there, when all seems lost, that love and joy are found as God promised to those who love Him---joy in the land of the living.

I received the email on the very day of my 30th wedding anniversary from Roseanna White that they want to publish SHADOWED IN SILK. They're working on the contract at this moment, so the release date is still to be set.

While this is only the first paving stone in the long and winding path called publication, I couldn't have made it this far without that still small voice of God saying, Keep on. Don't give up. I'm just as concerned about the artistic dreams I instill in you, as I am in all I've created.

I've been hanging onto that encouragement from God for the past 10 years. SHADOWED IN SILK is the second, full-length, fictional novel I've completed, but up until this past week I was unpublished except for a few smaller articles, and my birthmother piece in the Focus on the Family book, Thriving as an Adoptive Family.

God never let me wriggle off the hook, though at times I was a coward, not wanting to face the grueling perseverance needed to become a writer. Along the way He sent me opportunities that take my breath away. I'm still working hard on the non-fictional book for Children's Camps International, and I've also just completed the first draft of a new fictional novel called SOFI'S BRIDGE.

With God's strength, those 2 books will be finished within the next year as well. SOFI'S BRIDGE is about a young woman who, like me, struggles with the faith needed to believe that God cares about the creativity He put within her.

And the Children's Camps International story is the non-fictional account of what God is doing in various parts of the world today to bring little children to Himself.

So, it's all terribly exciting right now. I'm still running the gamut of emotions to be so affirmed...to have my 10 years of stepping out in faith to believe in something I couldn't see, actually become a tangible thing.

Somewhere down the road, people will hold the labor of my heart in the form of a book---with binding, pages to turn, and a story that I pray will make them relax, enjoy being whisked away to a far-off place, to feel romance, danger, suspense, and to come to understand a little better, the depth of Christ's love for them.
Posted by Christine Lindsay at 1:00 AM No comments: 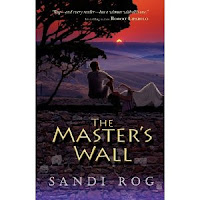 The Master's Wall by Sandi Rog is a delightful yet heart-gripping story of a young Hebrew slave, David, in the first century, and the love that grows from his boyhood for, Althea, the daughter of his cruel earthly master.

It's a story that satisfies the young teenage reader as well as the adult man or woman. The fast paced and intriguing plot keeps you turning the pages from the start as David is intent on either escaping his enslavement or earning his freedom by acquiring the skills of a gladiator to entertain his Roman master.

Love stories that start in childhood rarely draw me in, but this is one of the rare ones. Time after time, David finds opportunities to escape the villa just outside of Rome to go in search of his little sister. Yet, each time, his love for his master's daughter holds him back. Being the child of a cruel Roman man of power is not much better than being a slave, and David's heart wants to set Althea free as well as himself and his sister. At the same time he is guided by God to share his Christian faith--a faith that is despised and persecuted. Each time David whispers about Christ to another person he puts his life on the line.

David's and Althea's life and love hang in the balance until the last page. Sandi Rog has written characters that come to life on the page. They sparkle with all the beauty and fractiousness of children and grow into adults that inspire me.

Click here on The Master's Wall if you'd like to order this book.
Posted by Christine Lindsay at 7:27 AM No comments: