Today I have one of my favorite author friends sharing with you today. I love this writer, not just because she writes stores that teach and inspire, but because she truly loves God first, and desires nothing more than that people come to know Him. Golden's story touches me on such a personal level. I felt such similar feelings when I was in India with Children's Camps International---and God forgive me---at times thought of my own health when I took the hands of little children who have so little, and who suffer so much.

We were riding the crest of a wave, a wave of revival. Over seven hundred people had come to the Lord in one week in one church. In the wake of this wave, our youth pastor, a former professional singer, formed a traveling, singing youth group. He had the charisma, the talent, and the call of God on his life to attract young people like a “pied piper.” My husband and I served as chaperone these trips.

One of our first mission trips was through the Midwest and into Canada. During those days, witnessing on the streets and in public places was not against the law. These young people were on fire for God and wanted to tell people about Jesus. They were pretty fair musicians as well.

Our enthusiastic leader would signal the buses to stop and all one hundred-plus kids would tumble out of the buses, complete with guitars. Contemporary, popular songs would soon begin to fill the air on the street corner, or at the entrance of a mall, or in a park or restaurant. Crowds would quickly gather.

Those of us who were chaperones would mingle with the crowd. After a few songs, the young people would disperse and begin witnessing to the people in the crowd.

“Who is this group? Where are you from? Why are you doing this for free?” Questions such as that led to a natural witnessing situation and hundreds of people were drawn to the Lord.

I swallowed my fear of witnessing to strangers and began to share with them the truth that Jesus loved them and had a wonderful plan for their lives and didn’t they want to give their lives to Him? At the end of every day I counted up how many souls I had brought into the kingdom. My, what a good girl was I.

One afternoon the bus pulled up in front of a small inner city mission. Those few of us who had chosen to participate walked into the shabby store-front building. I sat down in one of the rickety metal folding chairs to wait for the children.

After a few minutes we heard the laughter and scuffling of children running into the room. I turned to greet the lovely little ones—except they were not lovely little boys and girls. The little girls did not have clean, beautiful hair done up in bows and ribbons. The little boys didn’t have on clean tee shirts and blue jeans. Their faces were not clean. They did not smell good. They were not mannerly.

A rambunctious little boy ran headlong for me with dirty hands outstretched. His nose was runny. His hair was matted.

I looked down at my starched white pants. In that split second, God showed me how self-centered my heart was and how this “great soul-winner” lacked true compassion.

I’m ashamed to admit that my first thought was, “He’s going to get me dirty.”

However, I reached down and took this precious little boy in my arms. He sat in my lap all evening. Yes, his unwashed body reeked. He needed his hair shampooed and combed. His teeth needed brushing. But most of all, he needed love, and he needed Jesus.

That was many years ago now, but I will never forget that little boy, and what he showed me about myself. I pray he is today a godly man, and I thank God for what that dirty bundle of enthusiasm taught me that day.

“And whoso shall receive one such little child in my name receiveth me.” 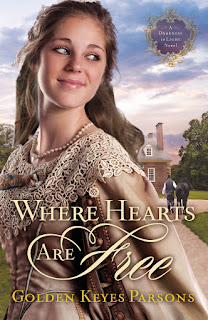 This is the cover of Where Hearts are Free, the third book in Golden Keyes Parsons Darkness to Light trilogy. I recommend it heartily to any of my female friends between the ages of 15 and 95 who like a fairly fast read, and who like things to happen in a story.

If you’re looking for an exciting, historically accurate, romantic, inspirational novel that has some ‘teeth’ to it, then this is one for you. The author doesn’t shy away from difficult issues but meets them head on, but in such a delicate, God-honoring manner—much like her hero and heroine who face hardship with tenacity in spite of their authentic human frailties.

And all the while, the author enchanted me by blending the beauty of four seasons in Philadelphia of the late 1600’s with the cultures and Christian denominations of immigrants in the newly birthed Americas. The details of a Dutch Christmas, the elegance of France brought by the Clavell family, the stalwart faith of the Quakers, and the majesty of the silent Lenape, a local Algonquin tribe who aid the Clavell brothers delighted me.

In this story we focus on Philippe, the son of Madeleine Clavell. Young Bridget (Gigi) Barrington has been in love with Philippe since they were children. He alone carries her deepest secret—a dark memory that tantalizingly stays out of reach so she cannot comprehend what the evil memories mean, or the face behind them.

Philippe denies his feelings for Bridget. After all, he is an indentured slave to her father. To keep the young people apart, Bridget’s father offers Philippe his freedom if he leaves the vicinity. Her father then arranges a marriage for Bridget to a wealthy man who also has secrets.

We follow the two thwarted lovers as they are separated. The author then takes her characters on an adventure with the very believable weaving of a forced marriage, the brokenness of lost love, the harshness of an abusive relationship, and even a dash of gun smuggling.

Or here on Golden Keyes Parsons if you'd like to visit Golden's website and learn more about her.
Posted by Christine Lindsay at 12:00 AM