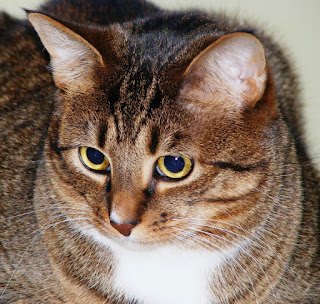 I stopped at that, and read it several times. This summer I have some big decisions to make that will have repercussions on my household finances as far reaching as my retirement. And I have never yet in my 40-some years of following Christ received an audible answer to my prayers or a blueprint laid out with directions to say, go left or go right.

I hate making decisions. I’d rather be like my cat. Scottie is a coward. Like me, he doesn’t like change. He goes rigid with fear when you move his kitty pedestal, while he’s sitting on it, a few inches closer to the window. He doesn’t comprehend that we’re moving the pedestal so he can better see the birds in the tree outside, which are his chief entertainment.

My daughter, Lana, who moved the pedestal laughed at Scottie. “Yeah, you don’t like change unless you’ve sat down, made all the plans and decisions yourself, and know exactly how it’s going to play out.”

Yeah, that’s Scottie. And it’s me too. If you’ve read my blog, you’ve heard me say it before; I’m a person of small faith. I prefer—no I want—to know it’s all going to be okay before I take that first step. But God doesn’t tell me the end results. As I pray for direction, I often don’t know if He’s saying take that direction, or the other. But it says in His Word that He does whisper directions in our ear if we ask Him, and if we seek His will with all our heart. So how do we hear that still small voice of God?

The second half of verse 19 in Psalm 94 was ‘Your consolations delight my soul.’

After my devotions, I prayed the Lord would show me in some small way that He heard my prayers, and that He would direct me. On that day I desperately needed something that I could comprehend. I needed to know, I really was like a sheep in God’s pasture, and that He was watching over and guiding my muddled mind into the right decisions.

For the rest of the day I mulled over, how God could console my heart.

My mum called later in the afternoon. She chatted about her day, and then told me of an unusual occurrence that morning. A small robin had hopped onto her balcony, checked out her potted flowers, and then sat on the arm of her patio chair, peering through the window at her for several minutes.

She laughed and said, “I wonder why I received that lovely blessing?”

“Probably because God wants to remind you that He has His eye on you,” I said.

When we hung up, I was pleased the Lord had sent my mum such a sweet blessing. It wasn’t until later it dawned on me. My mum and I often think the same thoughts. When she feels the Lord has told her something, I listen carefully. I realized then, this was God’s very personal way of consoling me that He has His eye on me too. That He’s watching carefully. He had sent the message through two members of His creation I would listen to—my mother, and a tiny, feathered ambassador of His earthly kingdom. 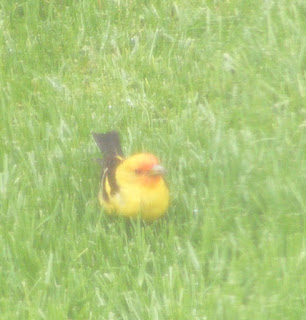 I feel I must acknowledge, the picture above is not of my cat Scottie, but of my precious little Daisy, who I lost the very day I came home from India in January.
Posted by Christine Lindsay at 9:51 AM

Email ThisBlogThis!Share to TwitterShare to FacebookShare to Pinterest
Labels: Cats, Depression, Discerning the Voice of God, My Family