YOU MEET THE MOST INTERESTING PEOPLE 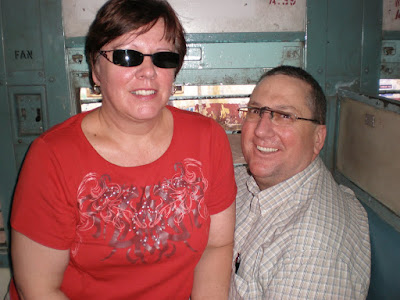 Greg and Oonaugh Wood on our 6 hour train trip in India.

Upon first meeting, you just never know how deep a person or persons will nestle into your heart.

I sat with our team in a restaurant at the Vancouver airport. From the booth I watched passengers stream past. A rather tall man stopped, his eyes lighting with recognition as he peered over the crowd. He nodded and quietly spoke to someone shorter whom I couldn’t see. A couple gingerly wove their way through the tables. Greg and Oonaugh Wood had arrived.

Greg is a person who gets right to the point. In a few minutes he told me he was an entertainer, more accurately an illusionist. As staff with Power to Change, the Woods have for the past 18 years travelled around the world putting on shows and presenting the gospel of Christ. They are part of the Film & Variety Arts ministry who use variety arts to reach those who would not normally attend a Christian event.

But over the years they've worked with almost every denomination and groups such as MAGI (Ministry Arts for Global Impact), Billy Graham Evangelistic Association, Focus On the Family, Athletes in Action and many more. They've gone out with CCI a number of times.

I was intrigued. I always am when the conversation turns to taking a risk for God. Greg loved what he was doing, even though I sensed weariness in him. They had already flown for 4 hours, had no proper night’s sleep, would fly for 11 ½ hours with a 4 hour stopover in Hong Kong, then fly another 5 ½ hours to India. Greg is way over 6 feet. And he’s no Slim Jim. I imagined him in those skinny airline seats with no room for his knees or his size 16 shoes. He and Oonaugh were already tired.

But behind Greg’s glasses his eyes lit up when he talked of God’s calling.

Oonaugh was hard not to love, a smallish woman with bright brown eyes. Like Greg, her eyes twinkle, but behind their smiles is intelligence. Behind their joviality is an iron hard commitment that will get them through the next 12 days and a gruelling pace. 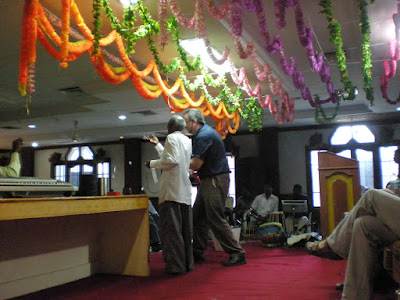 On our first day in India, the Woods presented at a meeting for 200 pastors. Grown men laughed with child-like awe as Greg did his slight-of-hand. The trick they liked best was when Greg supposedly morphed a 10 rupee bill into a hundred rupee bill.

Then Greg crumpled the money in his hand, dropped it to the floor, stomped on it, ground it with his shoe, and held it up to them. “Do you still want it? Does it still have value?”

In his deep baritone voice, Greg boomed out, “It’s the same with you. You may be beaten up, put down, dirty from past sin, but God still wants you. He can still use you.” 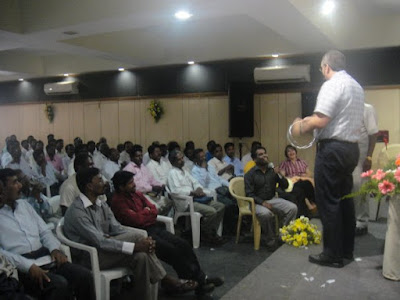 Greg and Oonaugh’s agenda diverged from the rest of the team. While we observed what CCI and India Bible Camp Ministry were doing, Greg and Oonaugh served.

At St Francis School of 130 students they did their show, and over 60 children made responses for Christ. At St. John’s School of 800 students, more than 500 children raised their hands they wanted to believe in Jesus as savior. At one orphanage of 1 140 kids, 30 kids wanted Christ. And the list went on for each of the 12 days in India.

In the mornings during our devotions, Greg and Oonaugh would often fold their silks for that day’s shows. Most days they barely had time for lunch or dinner before being rushed off to the next show. 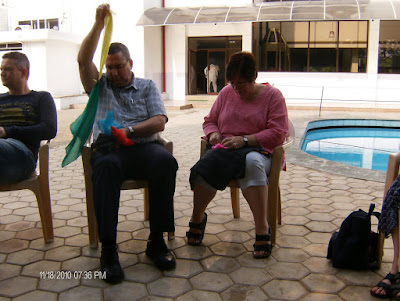 At one school they entertained 200 children, and every child wanted to invite Christ into their lives. At a large public school with Hindu statues all around it, Greg performed in front of a large picture of an Indian man who claims to perform miracles and is a self-made god. 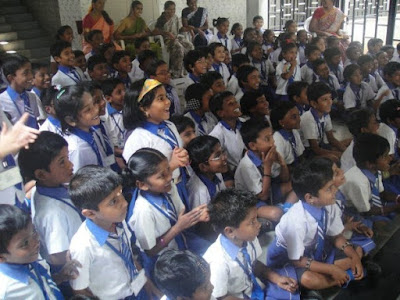 Perhaps in North America the implication of what Greg said wouldn’t carry the same weight. But in the eyes of these children, I could see understanding. They knew very well there were men who said they did magic, and who had thousands of followers believing they were a god. Even their Hindu priests could frighten them with threats of witchcraft and magic.

Greg Wood goes on to tell these children of the miracle of the son of God, Jesus who came back to life 3 days after He died. At that school almost all the children wanted to invite Jesus into their lives. 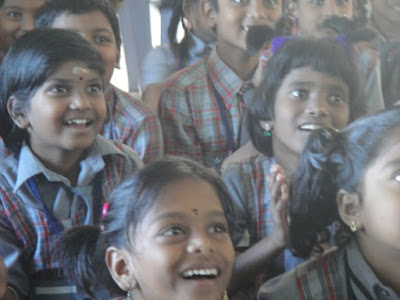 For ten days the Woods presented their evangelistic comedy show to over 10,000 people in 24 shows with over 2400 children responding to the Gospel. As the days wore on the physical toll began to show, the weariness in Oonaugh especially. On the last day as some of our team rested and others went sightseeing, Anthony asked Greg and Oonaugh to perform a number of extra shows.

Their driver tapped on their hotel door that morning, worried the answer to Anthony’s request might be no.

Greg opened the door with a smile. Oonaugh stood behind him with the suit cases packed with their silks and props. They were ready to go. They had a show to do. The kids were waiting.

If you'd like to see Greg in action in India, click on this link. It may be a little slow, so be patient.
Posted by Christine Lindsay at 12:54 PM