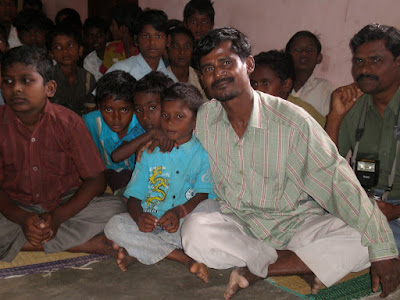 If I have to choose a highlight from the trip to India, I say the peak memory is of the children's camp follow-up programs. Imagine at one of those programs, about 2 hundred Indian children between the ages of six and twelve surging toward you, reaching for your hands, eyes laughing, and each one telling you, "Jesus loves you."

Or the memory of little children praying on their knees in complete adoration of God for a good ten minutes.

But at the back of my mind the memory of another generation pulls on me. 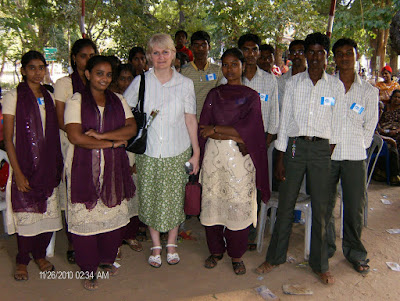 Close to the end of our trip our team arrives at a large rented facility in Chennai. Bamboo blinds keep the huge open-aired gymnasium cool. Loud music and singing pulses from this YMCA building that's packed with youth. The overflow of the 3100 young people attending this rally sit outside watching the program on large TV screens under the tall shade trees and pavilion-type tents. These Indian Christians, between the ages of 16 and 30, who are single, sing and clap their hands, and wait for the message to be preached from the Bible. No rock concert in North America has ever been louder or had any more energy than this gathering. 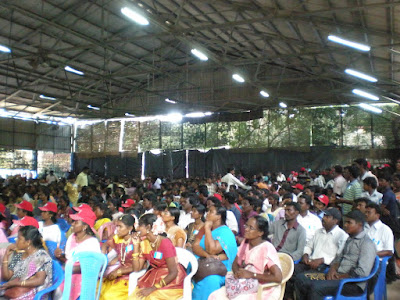 India Bible Camp Ministry puts on a youth rally like this once a year in each of the 15 districts of Tamil Nadu they currently work with. I do the rough math—15 districts multiplied by the approximate number of attendees . . .

The vibrancy of this memory stands out with the strength of a giant wave. The swell generated by these youth will continue to gather and crest, sweeping upwards from the south of India to change the entire country in the years to come. This segment of the population—young women in their exotic and bright saris, young men in their tailored slacks and crisp shirts—came out of the first wave of IBCM camp in 2003. These youth have matured in their faith, and are now leaders in their churches and camping ministry. Many of them have brought their Hindu and Muslim friends to the rally. 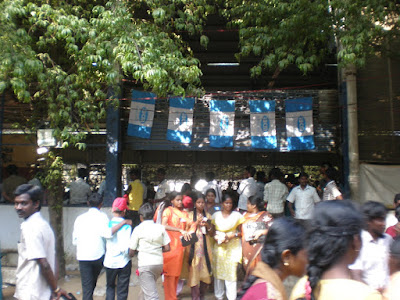 One young man I was introduced to has recently accepted Christ as his savior. He`s sharing the joy of his fellow Christians, he’s also struggling with the fact that his Hindu family has rejected him and expelled him from their home. He needs the prayer and support of his new brothers and sisters.

But then my memories slows to something quieter, something gentle. An image of the older generation eddies around my heart. At those same small village churches where I saw the children, I remember the shy joy on the faces of elderly women in their saris, their heads covered as they greet us at the front stoop of the church.

I return the greeting through a throat thick with emotion.

A young mother with a baby slung on her hip smiles and proudly shows me her child. I reach out to touch the silken hair on the little one's head. The mother and I can't understand each other's language. But her eyes light up when I place my hand on my heart and say, "Jesus." 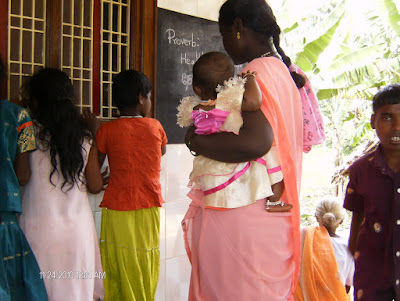 An old man who recently found joy in a personal relationship with Christ stands off to the side. During the children's singing, he sings as fervently as the kids, his eyes raised heavenward. He has found the God who truly hears him and sees him.

So when I'm asked, I cannot share one highlight. If I have to choose, I suppose the highlight would be the people--God's children in India. 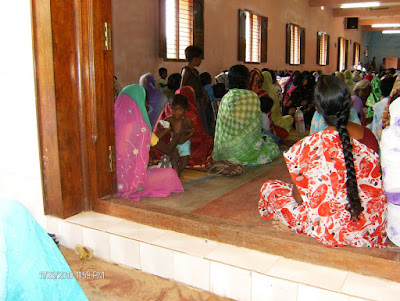 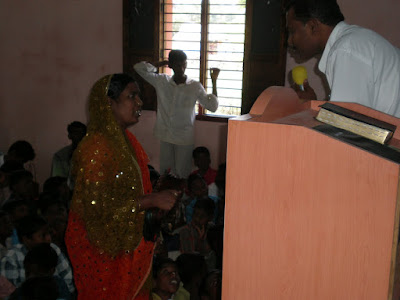 Posted by Christine Lindsay at 6:39 PM