LIFT UP YOUR EYES 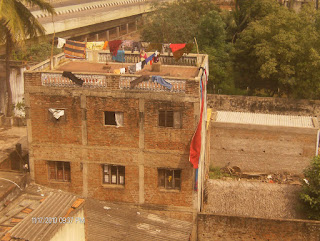 And there it is. The trip is over.

Twenty hours flying, not counting a layover in the Hong Kong airport, and I’ve left behind me that fascinating place, India, on the other side of the world in another hemisphere. A real place with real people, not just the fictional dream of my novel created out of research and history books.

Am I changed forever? Oh yes. Was it a God-ordained adventure? A hundred times, yes. But I’m home now and will try to share the experience with you over the next few months.

I knew it was a different world from all I’d ever known as soon as we disembarked the jet in the Chennai airport two weeks ago. Yet, I knew this land. I recognized it from all I’d read and written about. This warm, humid place with Hindu gods of multiple arms and legs set along the airport walkway was the same place our European and British forefathers had also set foot when they first disembarked from wooden sailing ships hundreds of years ago. India is a land of great natural wealth. Yet over all lies a layer of sooty grime and lack of maintenance.

But soon we were through the airport’s glass doors, no longer separated from the real India—her people—and best of all meeting the people of the India Bible Camp Ministry.

Outside the airport, at the same moment that I met Emery, Antony’s wife—-and Jerald who will come into this story often--I was also met by the deafening clamber of India’s traffic. It was almost 2 in the morning and still the horns of cars, buses, 3-wheeled auto rickshaws and motor scooters, bleated and blared like an unending squadron of honking geese. I lifted my nose to gather the scents and smells and laughed to myself. There was also a faint trace of tangy vegetation—perhaps from the nearby coconut palm trees—but that fragrance was covered up by the more invading stench of diesel exhaust from hundreds of vehicles roaring past. I stood there with a face-splitting grin. I couldn’t believe it. I was in India.

Before leaving home I’d asked my prayer supporters to pray that I would encounter God in India. The Lord answered that prayer as soon as I stepped out of the airport. However it took me a day or two to recognize His answer.

Antony the leader of IBCM had already left the airport with the first half of our 11 person team from Canada and was settling them in a hotel about a kilometre away. So the first person I met was his wife, Emery. The smile on her lips matched the honest friendliness in her laughing brown eyes. Though a stranger to her, she made me feel truly welcome. 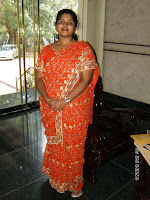 And then I met Jerald. This 40-year-old Indian man has been with Antony and the IBCM team much longer than Emery. Jerald has known Antony since they were both children. But I’m saving Jerald’s fascinating and inspiring story for the book. All I’ll tell you now is that Jerald is a walking sermon on what being a follower of Jesus is all about.

Jerald, a married man with 2 young children, has the small slender frame of a teenage boy. He stands at about 5 feet, several inches shorter than me. He has the dark delicate features of people from Tamil Nadu and his deep brown eyes convey the wisdom of one who has experienced pain and deprivation. But his wide flashing smile shows that past pain has long been healed. Inside of Jerald beats one of the warmest hearts for Christ and for others that I have ever met.

Shortly after grasping my hand to shake it, Jerald whisked away my luggage and that of Hilary, Judy, as well as Greg and Oonaugh Wood to take our suitcases over the broken and uneven sidewalks to the waiting vans. Like Oonaugh says, Jerald moves with the quickness of a mosquito, but every movement is engineered to take care of or to help another person. He doesn’t drive a vehicle like our other helpers did. For the next 12 days I found myself under the gentle care of Jerald. Speaking in his rapid Tamil language and few English words, he became our personal shepherd. He watched each and every step we took, that we wouldn’t stub our toe, or trip on uneven ground or a stair as we got out of a vehicle. Jerald was always there with his arms outstretched to protect and guide us through crowds. Yet who were we to this small-framed man? What had we ever done to deserve such tender protection?

The second part of my prayer request, that I encounter the Lord in India, was that He change me to be the servant He wants me to be. Other than Christ giving up His life on the cross there is no better human example than that of my friend, Jerald. I need to pay careful attention to the memory of 12 days in his company. He doesn’t strive for a place of prominence in the team he works with. Others preach or sing. Others are responsible for adminstration. Others drive the team on their visits to the 15 districts of Tamil Nadu each and every month. But Jerald is happy in his role of simply taking care of other people, of giving of himself. And when our visiting team has gone back to Canada Jerald returns to his work of maintaining the IBCM offices and doing whatever task he is given to further the ministry.

That first night, with Jerald’s assistance I made it over the uneven sidewalks and potholes to the vans waiting to take us to our hotel. The litter and rubble along the side of the street became easy to ignore in the presence of such shining selflessness.

To see the beauty of India all I had to do was lift my gaze from the streets, to the sultry breeze moving the coconut palms and tamarind trees, then let my vision settle on the face of one of India's Christians.

Jerald’s face was the first place I encountered God in India. 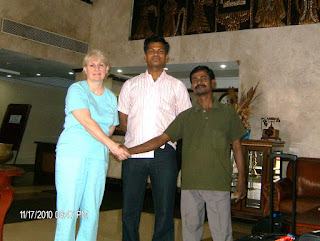 Jerald and Justin, one of our awesome drivers, and myself, the first night in India.
Posted by Christine Lindsay at 12:00 AM