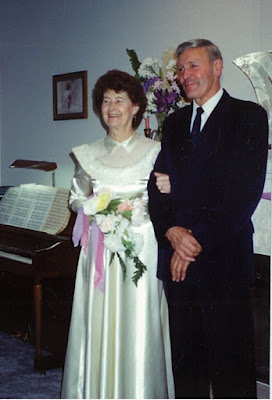 It never ceases to amaze me the power of each person's story. Through Elinore Relf's eyes we see the staunch and caring hearts of hard-working prairie farmers, and the transforming power of her husband's experience through a terrible ordeal. But as we see it all through Elinore's eyes, we see a hint of Elinore herself--her humility and inner strenth, her soft-spoken wit that leaves you smiling with just the trace of a tear at the corner of your eye.

Today's story also explains why Elinor has so many gorgeous coats. Each time I admire one in the church foyer, she grins and squeezes my arm. "Oh one of my kids gave it to me."

Elinore's grown-up children are only following their father's example. But you'll have to read the story to understand. (The picture shows Elinore and Bill on their fortieth anniversary, wearing the same dress and suit they wore on the day of their wedding.)

I sat on the doorstep of our farm home, sweaty and hot after mowing the lawn on a sunny day in July, 1972. Relaxing on the cool cement step, I reflected on the past year. Our 2 oldest children had graduated from high school. The haying was finished and 5000 bales, in excellent condition, stood in the fields, plenty of feed to winter the herd of 60 Holsteins on our dairy farm. The crops were showing promise of a bumper crop. Everything was going well. This was going to be a good year. My husband, Bill, and our ten-year-old daughter, Jo-Anne, had gone to the city to pick up supplies, a delightful reprieve after an arduous day’s baling. They should be home in time for milking—or so I thought. Then the phone rang.

“This is the Regina General Hospital. Your husband and daughter have been in an accident. Bill has a broken neck and Jo-Anne is in E.R. with cuts and bruises.”

“Lord, this can’t be happening. A Broken neck! Please don’t let him be paralysed.”

Jo-Anne was a pathetic sight when I picked her up in Emergency and we hurried to the Orthopaedic ward. Dr. Ailsby had just arrived and we listened intently.

“Bill, your cervical vertebrae is broken in two places (that’s the hangman’s vertebrae). Another quarter of an inch and it would have broken right through. One part has moved ahead, stretching and pinching the spinal cord. You must be careful not to move or your spinal cord could be severed. That would cause paralysis. I’m going to put a strap under your chin and attached it to a twenty-pound weight that will hang down the head of your bed. The weight should make the bones slip into place. Now, I have to meet with the Board of Directors of the Hospital to get their approval for a twenty thousand dollar halo contraption to be flown in from Toronto. It will be the first for Regina. I have just finished training in Los Angeles where they are having great success with halos. If I don’t get their approval you will be in a striker bed for six weeks or longer."

“What happened, Bill?” I asked as soon as the doctor left. “Are you in pain?”

“Pain! It’s like ten thousand toothaches. A three-tonne truck hit us at an intersection. I pulled Jo-Anne down on my knee and leaned over to protect her. Then we were pushed into another car. Guess I was knocked out and when I came to, I was choking. Knew my neck was broken so I put my hands around my neck to hold my head up. Told the ambulance attendants and X-ray technicians my neck was broken but they said I wouldn’t be talking if that had happened. They turned me and pulled me rather roughly and I blacked out. When I came to, three doctors were beside me. I could move my arms but nothing from there down. They were afraid to move me. Had to lie on the stretcher all day until Dr. Ailsby was available.”

We left Bill, knowing he would be in excruciating pain until the dislocated bones slipped into place, especially as they did not want to sedate him in case he moved. At the point when he thought he couldn’t endure the pain any longer, he felt the bones slip into place. Praise the Lord, the paralysis left and so did the pain.

The halo arrived from Toronto, a fearsome looking cage that would be attached to a body cast. Four bolts were drilled into Bill’s skull to anchor the steel contraption. “Put up with our halo for two months and you’ll be as good as new,” they told him.

Bill spent most of the time in a recliner chair as lying down was too uncomfortable. He supervised the farming operations but found it difficult not to run into things with the cumbersome halo that extended 9 inches above his temples. In true Saskatchewan form, the neighbours came with their hayracks and trucks to put 5000 bales in the loft. Their wives came with food and 25 people sat at tables on the lawn to enjoy a roast-beef dinner. We were overwhelmed with their kindness.

Seven weeks had passed and the pain medication took its toll on Bill. One day he started up the stairs but didn’t bend enough at the landing. The halo hit the ceiling and the screws slipped out of the holes in his skull and dug into other places on his head. He stumbled into the kitchen screaming, “Get Dad. Tell him to bring his Allen wrenches and take this thing off.”

Just then my dad and mother arrived. With shaking hands the two old farmers unscrewed the bolts and Bill, exhausted by the pain, exhaled a sigh of relief.
X-rays showed that the vertebrae had healed so well that a hard-collar would be enough protection. What a happy day.

By Christmas Bill was back to normal—no whiplash, no arthritis, no pain. I was overwhelmed when Bill took me shopping and bought me a knee length fur coat.

“Just to let you know,” he said, “how much I appreciate how hard you worked to keep things running smoothly this summer.”

Life went back to normal but there was a difference in Bill. It was months after the accident before Bill felt that he could share an experience that had changed his outlook on life.

“When the truck hit us, I left my body. I walked down a hallway that shimmered with luminous lights. Ahead I could see a door and hear the most glorious music. Heavenly choirs were singing. I was drawn to it and was filled with a peace and joy that I had never experienced before. I wanted to keep on going and never leave. Then I looked down. I saw our wrecked truck. I saw my precious little daughter lying on my lap, covered with glass and blood. I had to get back to her. I saw myself slumped over the steering wheel. I was choking. Then I saw my hands come up to lift my head and support it. I started to breath. I was back in my body again and regaining consciousness. I have gone over it in my mind so many times. How could I see myself, below me in the truck, unless I was dead for a few minutes? I feel that God has given me some more time and I will never take life for granted.”

Fifteen years went by. They were good years. Bill sold the dairy herd, enlarged the farm to two sections, got his pilot’s license, became a ski instructor and patroller, sang in the church choir, became a Saskatchewan Wheat Pool delegate and lived each day to the fullest. He saw our 3 children married and was a devoted grandfather to 6 grandchildren. Dr. Ailsby, his friend and fishing buddy, was with him when they did the test that confirmed Bill had A.L.S. With a heavy heart he sold the farm that had been in the family for 100 years and we moved to British Columbia. Five years after his diagnosis he was on a respirator and finding it difficult to breath.

One day in November, with family near, he said, “Do you see the man at the door? He’s waiting for me... I can hear the music and see the lights.”

This time Bill didn’t turn back.

I still get phone calls asking to speak to William Relf. I tell them, “Certainly, if you have a direct line to Heaven.”
Posted by Christine Lindsay at 12:00 AM