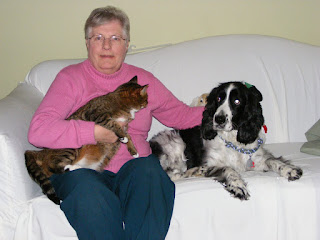 Sometimes it’s hard to understand why the Lord who loved us so much that He died for us to give us eternal life, would allow some of the really hard things in our lives.

Occasionally when I’m going through a rough patch—and we all fall into them from time to time—my faith can flag.

I had a particularily rough patch that lasted for several years. Each one of my children, including my birthdaughter, was suffering in one manner or the other.

You know what that's like when a myriad of heartaches afflict your loved ones. We take our children’s longings, problems, and sufferings, daily to God. And still they hurt. Fighting discouragement becomes an up-hill battle.

But I’ve grown to understand the Lord better these days, and despair does not linger like it used to.

I learned to count my blessings. Literally.

On days when I’m worried about my kids or my husband’s health, I take out my treasure box. It’s a metaphoric treasure box, but it’s full of fifty-three years of answered prayer.

I have to dig to the bottom, because some of these prayer answers go back decades, while some more recent ones lay like jewels strewn on the top. I lift a few out and hold them up to the light, and admire the facets of those prayers God answered long ago.

Oh yes, I remember that one now, the Lord heard me when I was thirteen years old and my grandmother renewed her faith in Christ . . .

And oh, there’s that other prayer when I was twenty-three, and that man with the heart of gold—David what’s-his-name—asked me to marry him.

And there are those other prayers answered—God gave me three healthy children. And oh yes, He brought my birthdaughter, Sarah, back into my life when I was forty-one.

And just three years ago . . . the Lord did such an amazing thing in my mother’s life it shines like a brilliant diamond. Perhaps because this last answer to prayer is so recent and one overflowing with happiness that I take it out the most often to admire it.

It wasn’t that many years ago that my mother’s self-esteem had been stripped down to the bare wires of her being for a multitude of reasons. Her General Practitioner prescribed antidepressants. But due to a combination of the wrong prescription, poor follow-up on the doctor’s part, and lack of co-operation from my mum, her emotional health actually grew worse. The doctor just kept prescribing stronger medications, but she steadily became more depressed.

When I saw my mother withdraw further and further from her family, and begin to walk around her apartment, fearful of going out, I began to believe her doctor that she was mentally ill.

For several years this went on, until it seemed to me that my mother’s apartment had become her coffin. She was crippled by fear; fear to live on her own, fear to go out of the house on her own, fear to actually live. And I had no idea how to help her. All I could do was pray daily that God would change her life, and enter her apartment with the power of the resurrection—to bring my mother back to life.

The day came when my mother collapsed because she hadn’t been eating properly for several years. Immediately at the hospital the doctors took her off the drugs her General Practitioner had prescribed. When I visited her that day, she lay in the hospital bed, looking like an eighty year old woman with no desire to live. She could barely contain her anger with me when I prayed at her bedside and read to her from the Bible.

But I saw my mother’s collapse as the answer to my prayers. As she recuperated my brother, sister, and I closed up her apartment. Two weeks later the hospital released her, and I brought her to my home to live with us. There my husband and I nursed her as if she were an elderly woman.

At first she could barely make it up and down the stairs of my home. But I caught a tiny gleam in her eye. She was going to make it up these stairs even if it killed her. I was starting to see glimpses of the strong woman my mother used to be.

For a long while all she could eat was the blandest foods, but things changed day by day. God sent us a new doctor who worked with me, and with his guidance we planned how to bring my mother back to complete health. But he urged me, this would take time, and she may remain emotionally frail. After two months in our home, she announced to me that she wanted to attend church with us. And four months after that she started to take walks by herself up the street. A half an hour later, she would return to the house with a proud grin on her face; she’d made it past a certain tree and back again.

From that moment on I watched as each month the Lord did things in my mother’s life and she grew stronger. She began to take a healthy interest in her appearance and wardrope. And I saw this woman become younger before my eyes. She joined not just one Bible study but two. She started to go to the 55+ group at the church. She started to make friends.

My mum is a busy woman these days. It’s got to the point where she jokes with us that she’s so busy she can only pencil us in for certain days on her calendar. Her coming back to life has been a miracle to me. And she's again, my best friend.

So when I fret and wonder when God will answer the prayers for my children, my husband, my other loved ones—I take out this shiny diamond of answered prayer, buff it against my shoulder and say, “thank you, Lord”. The same God who took care of my mum will answer the rest of my prayers in His perfect timing.

Philippians 4:6, 7 “Don’t worry about anything; instead pray about everything. Tell God what you need, and thank him for all he has done. Then you will experience God’s peace, which exceeds anything we can understand. His peace will guard your hearts and minds as you live in Christ.”
Posted by Christine Lindsay at 8:45 AM

Email ThisBlogThis!Share to TwitterShare to FacebookShare to Pinterest
Labels: Depression, Ilness, My Family