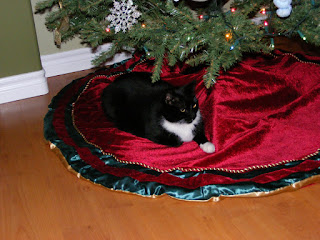 He always knew it was time for me to pray or work when I sat down on the couch with either my Bible or my laptop. He’d crouch on the floor, readying his muscles to spring, and look up at me, his eyes sparkling green with excitement. Once eye contact was made, he’d pounce up on the arm of the sofa, rub his head against mine with an affectionate purr then saunter across my Bible or my laptop. His tail lingered and flit, caressing my face as he made his way to my other side. There he would curl into a furry ball and continue that steady rumble of delight until he fell asleep.

We’d sit like that for hours, or many a chapter. I began to refer to him as the ‘editor’. And I loved him. He was my muse, one of my very best friends, and he purred at the sight of me.

He had many names, like royalty. As a kitten the kids and I sorted out what we should call him. At that time we thought he was a she. When they suggested ‘Portia’ I was delighted, thinking they meant the heroine of Shakespeare’s Merchant of Venice. That was until they explained they meant Porsche—the car. But it was a good compromise, until we took ‘Portia’ to the vet and discovered she was really a 'he'. Lana, an English major, then suggested Othello. That fit because he had a beautiful wedge-shaped face that was totally black, except for that little white dribble of white below his lip that travelled down to his all white belly as soft as a cloud.

But we don’t stand on ceremony in our house. During his kitten—Ninja—year where he completed many an athletic feat, my husband called him Push-kat-o. But as he developed into the sleek, elegant creature he was, he became Mr. Kitty to many, including the vet. To Lana he was always Meow Meow because they never did get along, he considering her bed to belong to him. Naturally there was bad feeling and he vocalized it loudly whenever she turned him out of her room. But all he had to do was silently pad across the hallway to my room where he knew he was always welcome.

But to me he was always PussPuss, a term of affection that was never general in any way. Someone once told me that a cat isn’t truly loved until it’s named, thinking that perhaps PussPuss wasn’t as revered as we said he was because we never could settle down to just one name. Oh, but the opposite is true. No creature of God’s could have been more dearly cherished. Or now missed.

He’s gone now, far too soon. But the God I serve is a huge God, one who sees all, even the smallest sparrow that falls from a tree. PussPuss is curled up close to my Lord, waiting for me to come back to work. We’ve got too many chapters to write.

I miss you my little friend. I miss you.
Posted by Christine Lindsay at 10:13 PM No comments:

Email ThisBlogThis!Share to TwitterShare to FacebookShare to Pinterest
Labels: Cats

If God Disappears -- a Book Review

Amazon Online Reader : If God Disappears: 9 Faith Wreckers and What to Do about Them

In David Sanford’s book “If God Disappears” I found nuggets of truth that I had been searching for some time in regards to the illusive issue of hope. Even as a Christian, with Heaven to look forward to, I often wonder what I can hope for in this life. Answers are hard to find when it appears that for years or even decades, a certain ‘hope’ we cherish will never come to pass, or when we are suddenly confronted by personal tragedy. At times like that many of us cry out,not, where is God, but “Where has the God—I thought I knew—gone?” A crisis of faith is unavoidable for everyone, or for someone we know. For that reason this book is highly relevant.

In Mr. Sanford’s book he tackles these sticky questions by looking at nine different faith wreckers. He explores ways of going beyond just coping when we’re hit by the pain of losing someone, the tragic consequences of living life recklessly, when all our faith and courage has been beaten down, and so much more. He combines great intellect and years of study with a refreshing lack of rhetoric so that whatever stage a reader is at in their spiritual walk or understanding, they will find concepts to help them re-discover God when He seems to have disappeared.

The easy-to-read chapters encourage those who are new to the Christian faith or who are searching for a faith, whatever their background or set of beliefs. At the same time I found what he had to say stimulating to a person like myself who has walked the Christian faith for more than forty years. It was as though Mr. Sanford took me to the bedrock of my faith and encouraged me to walk about it from a new angle and see things I had never seen before—mostly what I can hope for in what appears to be a hopeless world.

Here is David Sanford's website where you can read and be encouraged right away if you are feeling hopeless.
Posted by Christine Lindsay at 8:52 AM No comments: